Dalila Eshe, who helped lead the Princeton women’s basketball team to the NCAA Tournament as an assistant coach, has been named head coach at Yale.

The former Florida star takes over the program from Allison Guth, who left after six seasons to become coach at Loyola Chicago.

“I am humbled by the magnitude of being the first Black female head coach for women’s basketball at Yale,” Eshe said, as reported by Yale Daily News.

Eshe spent three seasons at Princeton as an assistant and the recruiting coordinator. The Tigers (25-5) won the Ivy League title this past season and upset Kentucky in the NCAA Tournament. She has no head coaching experience but has served on staffs at Loyola Maryland, East Carolina and La Salle. 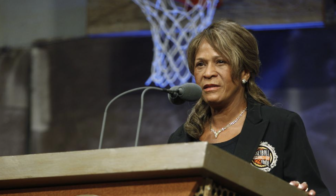 Eshe was an all-conference player in 2006 at Florida and spent time in the WNBA with Seattle, Washington, and Atlanta. She also played professionally for nine years in Romania, Turkey, Russia, the Czech Republic, Ecuador, Taiwan and Portugal.

“This program has been very successful over the last few years with the hard work of the student-athletes and the staff,” Eshe said in a statement. “I am so excited to lead this amazing group of young women. We will pride ourselves on putting in the work to win championships.”