Calling a Black baseball player ‘Jackie’ is not a compliment

OPINION: New York Yankee Josh Donaldson’s comment to Chicago White Sox Tim Anderson was a condescending reminder that Anderson is an “other,” a Black man in a white man’s game. 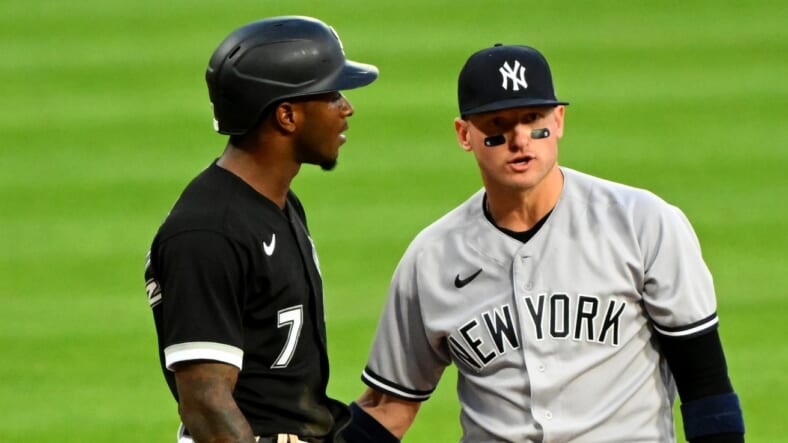 Josh Donaldson of the New York Yankees, right, exchanges words with Tim Anderson of the Chicago White Sox after Donaldson unsuccessfully attempted to keep Anderson from reaching third base in the first inning on May 13, 2022 at Guaranteed Rate Field in Chicago, Illinois. On Saturday, Donaldson called Anderson “Jackie” during a game at Yankee Stadium in New York. (Photo by Ron Vesely/Getty Images)

If fair treatment in life-and-death issues meant accepting verbal abuse, I’d listen. But we know life doesn’t work that way. Letting white folks talk to you wild makes them think other forms of abuse are OK, too. The cycle is older than dirt and faithful as sunrise: Words lead to thoughts, which lead to actions, which lead to us catching hell. 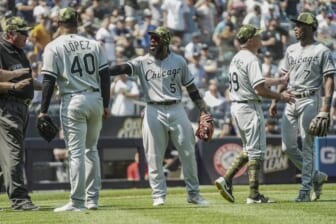 During Saturday’s game against the Chicago White Sox, New York Yankees third baseman Josh Donaldson told us he’s racist without saying the n-word. He thought he was slick, calling shortstop Tim Anderson out his name by referencing the patron saint of Black ballplayers, stirring emotions that sparked a near-brawl later in the game.

“He was trying to call me Jackie Robinson, like ‘What’s up, Jackie?’ I don’t play like that,” Anderson told reporters after the game. “I wasn’t really bothering nobody today, but he made the comment, and it was disrespectful.”

We didn’t hear Donaldson’s tone or inflection, but Anderson didn’t hear a compliment, and neither did I. It was a condescending reminder that Anderson is an “other,” a Black man in a white man’s game. He’s among the latest to feel it, and Robinson was first when he broke the major league color line in 1947.

Donaldson tried to gaslight us afterward, claiming he was “joking around,” but White Sox manager Tony La Russa didn’t find the humor. Me neither. “(Donaldson) made a racist comment, and that’s all I’m going to say,” La Russa told reporters. “That’s as strong as it gets.”  (MLB suspended Donaldson for one game for “inappropriate comments.”)

On the flip side, Donaldson’s excuse is weak as it gets.

In a 2019 Sports Illustrated article, Anderson indeed said he felt like “today’s Jackie Robinson,” trying to bring fun back to baseball. Granted, a bit of a stretch, but we get it. The number of African-American major-leaguers has never been lower— roughly 7 percent. Anderson is on a mission to change the game and add some flavor. Respect.

But Donaldson wants us to believe he meant no harm, that it was an inside joke they’ve shared in the past. He doesn’t know what changed and caused offense. “Obviously [Anderson] deemed it was disrespectful, and if he did, I apologize,” Donaldson told reporters. “That’s not what I was trying to do.”

Then what’s the joke? What about Anderson or Jackie is funny?

Sometimes the quiet parts are said aloud. They operate in silence; other times, through deeds and practices. If, in reality, you prefer conditions prior to 1947, you can keep that yourself while gains erode and Black players dwindle. Maybe it’s a laughing matter within your circle, but catch this heat if you slip up in mixed company.

I don’t know who Donaldson thinks he’s fooling. They aren’t boys like that. In fact, their dust-up a week earlier—Donaldson applied a hard tag, and Anderson responded with a shove—had both squads acting like they wanted to fight. 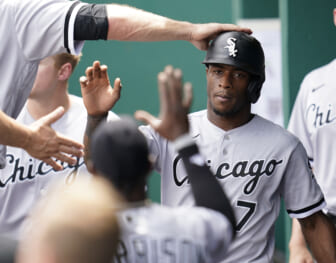 But, sure, kid about a civil rights pioneer the next time y’all see each other. Anderson and his teammates got it, and they wanted to let Donaldson know.

Chicago catcher Yasmani Grandal ignited Saturday’s commotion by getting in Donaldson’s face, causing both benches to clear. Anderson had to be restrained from getting a piece of Donaldson. Closer Liam Hendriks called BS on feigned ignorance.

“(Donaldson) knew damn well what he was doing,” Hendriks told reporters. “He intended it to be exactly what it was. He just didn’t intend for the repercussions, which were swift.”

Anderson got some payback Sunday, blasting a three-run homer late in a 5-0 victory. He showed and proved the best response when a fool acts out.

Donaldson might not be a racist, but he’s given us reasons to wonder the last four years. Among those suspects, saying “What’s up, Jackie?” to Anderson is like “What’s up, Martin?” to a Black preacher, or “What’s up, Thurgood?” to a Black lawyer. Donaldson apparently “joked” like that twice, despite it falling flat the first time.

Lord knows we’ve got more pressing concerns than a baseball player talking crazy. But you can’t let white folks speak to you any old way.

Gotta nip that mess in the bud before it grows into something worse.