‘Legs and hips and bawdeeeeee’: Kandi Burruss has given us our summer earworm

OPINION: The single, which is from Kandi’s stage play ‘A Mother’s Love,’ recently became an internet sensation. 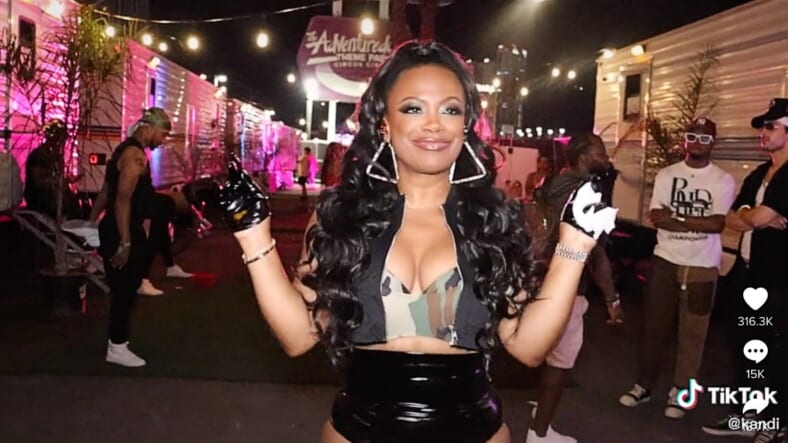 Unless you have actively avoided Twitter, Instagram, Facebook and TikTok for the last few weeks, you have likely heard “Legs, Hips, Body,” the now-viral single from singer, songwriter, actress and Real Housewife of Atlanta (an actual housewife at that!) Kandi Burruss’ stage play, A Mother’s Love.

The song was originally released in 2014 but recently experienced a resurgence after Kandi posted a video of herself with the song playing in the background as she prepared to perform at the Lovers and Friends concert in Las Vegas. The catchy tune features Kandi, Porsha Williams, D. Woods and Funky Dineva on vocals—backed by a bass drum-heavy track. It is definitely some “sway your hips” type music, so naturally, Kandi’s video went viral.

@kandi I was giving #LegsHipsAndBody at the #loversandfriendsfestival ♬ original sound – kandi

It wasn’t long before other TikTok creators made their own videos of the song. The trend spread to Instagram in the form of Reels and picture captions, and people on Twitter got in on the fun using the song’s catchy hook as the caption for pictures of various folks giving all different types of BODY BODY BODY.

Listen. If Kandi doesn’t do anything else, she is going to give you a catchy bop to sing along to. After all, this is the woman who penned “No Scrubs,” “Bills, Bills, Bills,” “Tardy for the Party,” “The Ring Didn’t Mean a Thing,” and who has writing credits on “Bug a Boo,” “There You Go,” and “U and Dat.” She knows her way around a hit.

While she may not have intentionally set out to give the internet its latest, greatest hit, she is not one to let the moment pass her, and she has now taken to social media to encourage people to participate in the #LegsHipsBodyChallenge. Her RHOA castmate Kenya Moore got in on the challenge, posting her own video with the hashtag.

Other celebrities, including Chloe Bailey (who breaks the internet on a weekly basis), have gotten in on the fun as well.

I’m not gonna lie; since the first time I heard it a week ago, this song has been stuck in my head, and I find myself singing the chorus out loud a few times a day. It’s the perfect song to strut in front of the mirror as you decide what outfit you are going to wear for the day. It is the consummate “I am definitely feeling myself tuh-day!” jam.

Meanwhile, the TikTok videos and Instagram Reels keep coming. Black creatives are undefeated. We always set the trends, and we determine what is hot, and what is hot right now is Kandi’s single from nearly a decade ago.

There have been so many great videos, some kind soul was good enough to create a compilation video that includes some of the greatest hits. Check it out above and let us know some of your favorites. Have you made your own video yet? What are you waiting for? Let’s get ’em, girls!