The Roots Picnic, the annual summer event created by the legendary hip-hop crew, returns to Philadelphia's Mann Center this weekend.

After two years of virtual performances, one of the most beloved urban festivals in the nation is returning to Philadelphia. The Roots Picnic, the annual summer event created by the legendary hip-hop crew, will be back at the Mann Center this weekend.

The two-day soiree features four stages spread across the Fairmount Park venue. According to the Philadelphia Inquirer, this year’s performances include a headlining set of the Roots playing with soulstress Mary J. Blige, as well as performances by fellow Philly favorite Jazmine Sullivan, singer Summer Walker, rap legend Rakim with local legend DJ Jazzy Jeff and Nigerian pop star Wizkid, whose single “Essence” was one of the biggest songs of the last year.

“We’ll probably — knock on wood — have upwards of 60,000 tickets sold across the weekend,” the Roots’ manager, Shawn Gee, founder of Live Nation Urban, the Los Angeles-based division of the gigantic concert promotion company, told the Inquirer. Gee has presented several other festivals around the nation, including H.E.R.’s Lights on Festival in California, but adds that while the concerts he presents are centered on “Black culture from a Black perspective,” the Roots Picnic is the blueprint.

Created in 2008 with just 2,000 attendees, the Roots Picnic is “the Philadelphia festival for Philadelphia by Philadelphia,” according to Roots frontman Tariq “Black Thought” Trotter. This year also marks 35 years of collaboration between Trotter and Ahmir “Questlove” Thompson, who is also now, thanks to Summer of Soul (…Or, When the Revolution Could Not Be Televised), an Academy Award-winning documentary filmmaker.

This year’s Roots Picnic will also feature a podcast stage and screenings of short films chosen by the BlackStar Film Festival. And because no festival is complete without food, there’s the Quest Loves Food Cookout area, curated by Philly food YouTuber JL Jupiter. 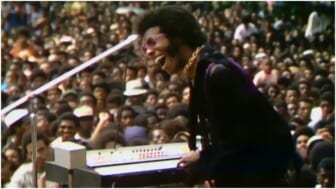 The already-crowded slate of events will also include a spades tournament, the unveiling of a mural dedicated to Black Thought and several official after-parties.

Gee told the Inquirer the break from the in-person festival “gave us two years to think about how we were going to bring this brand back. Ahmir and Tariq and I spoke about how we wanted to curate this year. Coming out of George Floyd and everything we were coming out of as a culture, we wanted to build something that shows that Black culture isn’t a monolith. It’s a mosaic.”