This or that! Which is better, the soundtrack or the movie: ‘Love Jones’

OPINION: In a series for Black Music Month, Panama asks one of the all-important questions about Black movies: Is the soundtrack actually better than the movie? 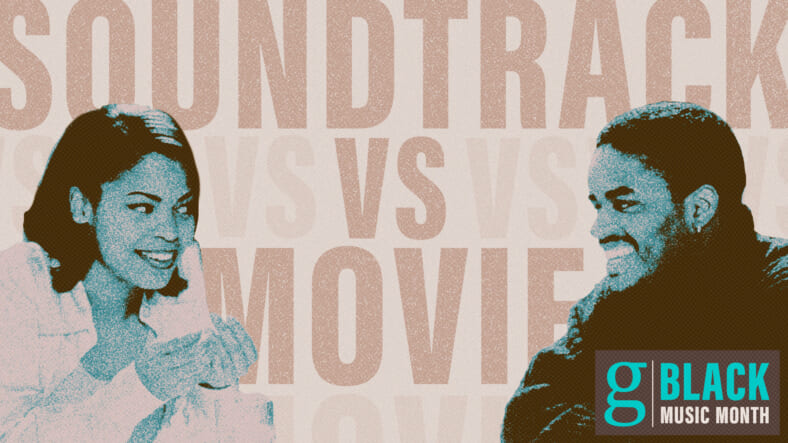 Well in the spirit of Black music celebratiousness (just go with it) and debate, a thought crossed my mind. We have iconic movies we love in the Black community (mostly, some of you have no souls and hate good things) and some of those movies also include landmark, iconic soundtracks. It begs—damn near Keith Sweat-like—if a movie is iconic and the soundtrack is iconic, which one is, ya know, MORE iconic? Basically, which is better: the movie or the soundtrack?

I know. I’m literally the meme that goes “Nobody. Nobody else. Me: Wanna fight?” But what’s Black life without a little spirited conversation? Exactly. Now, in order to properly assess which is better or more iconic, we need some categories—a rubric if you will. I really like the word rubric. Anywho, For the sake of love, peace and soul (really for the sake of time), I’m proposing five different scientifically subjective and anecdotally sound categories; five because we need a potential tiebreaker:

When you think of INSERT FILM NAME HERE, do you think of the movie or the soundtrack first? While this entire exercise could probably start and end here, why would we do such a thing? Plus, people are wrong sometimes. Not me, though. Y’all.

Which had more impact? While sales should never be the main determinant of iconic status, a soundtrack can’t be iconic if nobody actually bought the thing. Or spent any time talking about it or there were no videos, etc. A movie can become a cult classic, a soundtrack pretty much needs to bop out the gate. Similarly, if a movie falls in the forest and nobody sees it, well, who in the hell left the gate open? It makes more sense in my head.

How many iconic stars are in it? Is the movie full of stars (or future stars) and does the soundtrack have a plethora of big names and features? Iconic things include iconic people. I’m sure there are exceptions to this, I hope I never get stuck with one.

Which has remained more culturally relevant? Admittedly, this is mad subjective, but I also objectively feel like this won’t be that hard to determine. Some soundtracks from the ’90s really just killed the game (i.e., The Show soundtrack; I haven’t even been compelled to watch the doc since probably 1999, which is a year I always aim to party like.)

This math might get fuzzy but I have my TI-83, so I’m ready to go. The first movie up in this series?

Love Jones is the 1997 film written and directed by Theodore Witcher. I think we can all agree that the movie and the soundtrack (officially titled Love Jones: The Music, released via Sony Music) are iconic. But which one is more iconic? Let’s fight.

Hmm. This one is hard. At this point, I want to say the movie. Love Jones is now 25 years old and that means folks are writing retrospectives, etc. and talking about it on podcasts and whatnot. Thing is, there’s no conversation about the movie without the soundtrack, but I’m not sure folks are lining up to discuss the soundtrack the way they’re doing the movie. I could be wrong but I’m probably not.

Which had more impact?

This one isn’t as hard. In our minds and hearts, I think we all want to believe Love Jones hit theaters and knocked that thang out the park when in reality, well, that didn’t actually happen. According to Box Office Mojo, Love Jones only grossed roughly $12 million in box office sales. Perhaps that was tempered by the number of theaters, but in retrospect, it definitely was more of a VHS/DVD darling (and now streaming) than maybe it was an immediate hit. Meanwhile, that Love Jones soundtrack…baaaaaaaaby, peaked at No. 3 on the Billboard R&B album charts. The new songs from the film that are on the soundtrack, especially from Lauryn Hill and Dionne Farris were all over the place. And the film reinvited a whole new generation of folks into the world of John Coltrane & Duke Ellington’s “In a Sentimental Mood.” I think we have a winner here.

How many iconic stars are in it?

Here’s the list of movie stars (and I can do this from memory, of course): Nia Long, Larenz Tate, Bill Bellamy, Isaiah Washington, Lisa Nicole Carson and Khalil Kain. That joint is top heavy considering Nia and Larenz alone. Isaiah is up and down, but in 1997, Bill Bellamy was that dude lest we forget he actually got his OWN movie to star in with Def Jam’s How to Be a Player.

The soundtrack included the following folks: Lauryn Hill, the Refugee All-Stars, Dionne Farris, Maxwell, Groove Theory, Trina Broussard, Kenny Latimore and the Brand New Heavies, among others. That Lauryn Hill feature in 1997 is everything. She was coming off her star-making turn on the Fugees’ 1996 album, The Score, and on the cusp of releasing her seminal work, The Miseducation of Lauryn Hill in 1998, and was riding high off the instant classic of a jam, the remake of Roberta Flacks’s 1974 hit, “Killing Me Softly” and the iconic 1996 MTV Music Awards performance.

I want to say the movie had more iconic stars but that Lauryn Hill feature counts for like 5 people. But still Larenz Tate and Nia Long are still culturally relevant. So is Maxwell, but his song is the remix to a song off of his debut album. I think we have to go movie here.

What is the biggest moment?

The movie has several big moments and quotables. For instance, even if I’m not going to get any Toasted Oats, I like to tell my wife that “I’m going out for some m——– Toasted Oats.” The movie also has one of the most memorable poetry moments in a movie ever with Darius Lovehall’s performance of “Brother to the Night (A Blues for Nina).” Or the close to closing lines, “This here, right now, is all that matters to me. I love you Nina  and that’s urgent like a m———–r.”

The soundtrack featured the hugely popular, charting song, “The Sweetest Thing” by Lauryn Hill which peaked at No. 6 on the R&B charts and stayed on the charts for 27 weeks. Whew, chile. I literally did not even know until now that Dionne Farris’ “Hopeless,” which opens the film, didn’t chart. I still tell folks that I’m hopeless like a penny with a hole in it. I’m about to do it right now to my managing editor the next time she asks about a deadline (Managing editor: haha). Maxwell’s “Sumthin’ Sumthin’ (Mellosmoothe)” was a hit for all the folks looking to make slow jams or “Get The Drawz” mixtapes, which were a thing back then, but I’m not sure it still, ya know, stands out as much as the movie scenes.

Which has remained more culturally relevant?

I think this one might be more of a layup than I realized. Folks still talk about the soundtrack, as they should—it’s amazing. But I think streaming services and those that specifically highlight Black content have reintroduced Love Jones back into the Black rom-com consciousness in a way that I think reinvigorated the interest in the movie. I don’t know if the same can be said about the soundtrack, which is interesting, I think the Love Jones soundtrack would actually fit in quite well with today’s marketplace; a resurgent neo-soul (some hate this term) vibe is afoot, and this soundtrack fits that aesthetic perfectly. I think in this current landscape of Black filmmaking and films and “good versus bad” films, Love Jones seems to come up more frequently because of the storytelling and the acting in a way that the soundtrack doesn’t seem to for awesome music. I’d love to be convinced otherwise.

Well, in a 4-1 landslide victory, Love Jones, the movie, is the more iconic between the film and the soundtrack.

Now let me go practice Darius Lovehall’s poem; I feel like standing on a street corner and sharing today.