Deshaun Watson and the Cleveland Browns deserve all the smoke

OPINION: The NFL must act after a New York Times report revealed the $230 million QB sought 66 different massage therapists over a 17-month period. Several told similar stories as the 24 women who are suing Watson for sexual harassment and assault. 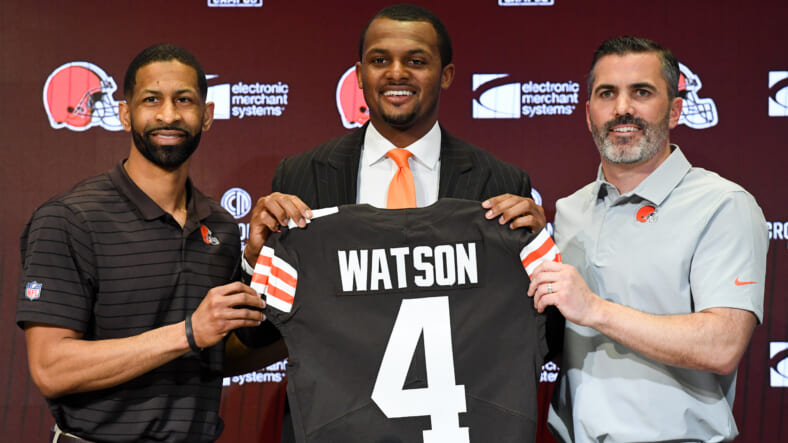 Let’s hear it for the Cleveland Browns.

They sold their soul for quarterback Deshaun Watson and got more than bargained for. When he arrived in March, Watson was facing 22 civil suits accusing him of sexual harassment and assault during massage sessions.

That number has grown to two dozen.

Two weeks ago, NFL commissioner Roger Goodell told reporters “we’re nearing the end” of the league’s investigation. But he might have to pump the brakes due to recent developments, making the Browns twist even longer before learning Watson’s fate.

Cleveland wants to move on from Watson’s signing but can’t begin until the NFL makes a disciplinary decision. Meanwhile, owners Jimmy and Dee Haslam fall asleep every evening (hopefully to nightmares), wondering what revelations might await the next morning.

They deserve every second of anxiety.

Since Goodell spoke at the league meeting late last month, there’s been a Real Sports report featuring two of Watson’s accusers. A woman says the show triggered her into filing the 23rd lawsuit against Watson; the 24th woman followed a few days later. Tuesday’s newsflash from the New York Times requires more damage control from Cleveland and perhaps the Houston Texans. Watson’s former team must answer for providing hotel rooms and non-disclosure agreements that supported his actions.

According to the article, Watson booked massages with at least 66 different women over 17 months, from fall 2019 through spring 2021. The list includes the 24 women who filed lawsuits, at least 15 therapists who issued statements of support at the request of Watson’s lawyers, and at least another 15 therapists who don’t fall in either category.

How much were the Browns aware of beforehand? Irrelevant. They knew enough to know better and still gave him a guaranteed contract for $230 million. Besides, they traded for Watson before the second of two grand juries in Texas declined to pursue charges against him.

The Browns’ sorry behinds couldn’t even wait until the threat of a criminal trial had passed.

Watson said at his introductory news conference in March that he’s “never assaulted, never disrespected and never harassed any woman in my life.” His lawyer has stated that three sessions included consensual sex afterward, at the women’s suggestion each time. That’s the defense, and they’re sticking to it.

Maybe it’s me, but it’s hard to believe he was just seeking massages from 66 women over 17 months. Especially since he hunted many through social media and repeatedly said under oath that their experience, skill and training “wasn’t a priority.”

Sure, that’s normal for an athlete whose body is worth hundreds of millions of dollars. No need for a small rotation of top professionals.

The Browns want us to conclude that all of Watson’s accusers are lying, but I can’t and won’t. The women are much more plausible to me, even if he thinks he did nothing wrong.

The league has no choice but to act. Watson’s alleged behavior—criminal or not —is bad for business, and his presence slaps female fans in the face. Unlike the case of New England Patriots owner Robert Kraft allegedly soliciting sex that one time in a massage parlor, two dozen claims against a player can’t be ignored.

Per ESPN’s Kimberly Martin, Watson posted lyrics from “Rich Off Pain” this week after the most recent civil case was filed: “See the blogs can’t break me down, see, I’m the voice, I don’t reply. But the rumors y’all done heard, I’ma humbly deny, yeah, yeah.”

I’mma humbly suggest his denials are pointless. He should brace for impact because the hammer is coming.

The “I Stand With Deshaun” crowd hates this, but the damage is done, and only the penalty remains undetermined. Will it be the commissioner’s exempt list, essentially a suspension with pay, if the probe lasts into the season? Will he be suspended for four games? Eight? The entire season? Put me down for the last option, but no less than a dozen games.

When the sentence is issued, listen for competing howls that it’s insufficient or excessive. But both sides can agree on this: Massage therapists shouldn’t have to worry about Watson from here on. Nor should any other women.

As for the Browns, they’ve earned all the heat and smoke. The same goes for the NFL if it doesn’t come correct with the punishment.