Who all gon’ be over there? An ode to the cookout

With Juneteenth weekend upon us, writer and food aficionado Ray Marcano reflects on the timeless African American tradition of the cookout.

You gonna let all the good air outside?

Who all gon’ be over there?

Don’t give that fool nothing else to drink.

Then chances are, you’re at a cookout.

Summer months and warm weather mean more going outside to cook. One in five Americans says they’ll fire up the barbecue several times a month during the summer, according to Statista. In fact, the National Retail Federation says 6 in 10 Americans will cook out on July 4, the most popular holiday for grilling.

For Black people, the cookout isn’t only necessarily about one holiday or the food—although you can bet the aunties and elders and grill masters have long been making preparations for this Juneteenth weekend. The cookout is more about community, family, and culture that goes far beyond what you put on the grill or cook in the kitchen.

“It represents us coming together despite all the things that are happening in the world,” Gaelle Amazan-Ivory, the dean of students for Wilberforce University, one of the country’s historically Black Colleges and Universities, told the Grio. “This is the one space where we can be our authentic selves and act how we want to act. We don’t have to code-switch because we’re not at work and we don’t have to pretend like we’re someone we’re not.” 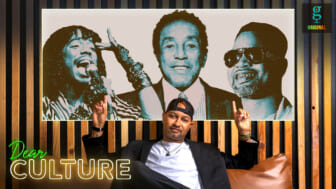 Also Read:
‘Dear Culture’: 15 of the Blackest Songs (in celebration of Juneteenth) with The 80z Babies’ Yinka Diz and Outlaw

The cookout also differentiates itself with the set of rules—some set in stone, others not so much—that Black families across the country can identify with.

First, don’t confuse a cookout with a barbecue. The cookout is the event. The barbecue is the technique for cooking the food. Putting a piece of chicken or a burger on the grill and bringing it inside is not a cookout. You hold a cookout outside, no matter how hot and sticky the weather.

There’s also no question about who’s in charge.

“There’s a matriarch, so someone’s grandma is at the head of this,” Amazan-Ivory said. ”Probably the aunties are inside making the potato salad, the greens, and the macaroni and cheese.”

I told her a story I vividly remember about a cookout at my cousin’s home in South Carolina. Two men showed up, each with a grill. There was a heated dispute between the two because—and here’s one of those hard-and-fast rules—only one man works the grill.

“I haven’t heard of that, bringing more than one grill. So y’all were trying to start something,” Amazan-Ivory agreed.

One area that differs: who eats first. In some families, it’s the children or the elders. In others, no one eats until grandma gets a plate.

The cookout games, music, and conversation are as important as the food itself. When it comes to activities, stay away from the spades and dominoes tables if you bring a weak game. Your feelings will get hurt. And as I learned when I was young, stay away from the adults when they’re playing because you’ll hear all sorts of words you didn’t even know existed, especially if someone reneges. You know what that is if you play spades. And you know if that happens, Satan hides because of the hell about to come. 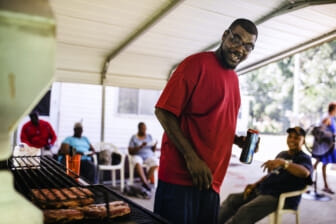 The only rule on when to have a cookout seems to be that the temperature’s warm enough. You don’t need a holiday to break out the grill. If someone feels like cooking, it’s on.

“Life is hard enough, so anytime there’s an opportunity, people will do it,” Amazan-Ivory said.

She listed banana pudding as her favorite cookout food. For me, I wanted the potato salad so bad I would sneak into the kitchen to sneak a taste. An auntie would give me the side-eye and ask, ‘Why you lettin’ all the good air out?’ “

In addition, the baked mac-and-cheese (only trusted to those who added the ingredients with perfect proportions and surgical precision), deviled eggs (I never liked them but the cookout would stop if they weren’t there), and sweet potato casserole (no marshmallows unless you want the heckling of your life), had to be there. Some sort of pork, generally ribs, and grilled chicken would do, and maybe some fish, if was freshly caught. Bringing a store-bought barbecue sauce will embarrass you for generations to come (you remember the time…”

Over the last decade, the cookout has garnered increasing attention. In 2015, Deadspin published  the hilarious, “A Caucasian’s Guide to Black BBQ,” incorrectly using “barbecue” instead of “cookout.” Mainstream publications like Travel and Leisure and Bon Appetit have run stories within the last year recognizing the impact the cookout and barbecue have, not only on the culture of Black people but on the larger American society, as well. And Black food bloggers have held a virtual Juneteenth Cookout since 2017.

“We live in a world where if we act like our authentic selves, we could be punished for it,” Amazan-Ivory explained. “If I wear my natural hair, if I speak using African American vernacular slang, I can’t be comfortable doing that, but I can do that at the cookout. And this is a space where we support one another, where we don’t think about all the crap that’s happening in the world.

“I think it’s a space of healing.”

Ray Marcano is a longtime, award-winning journalist who has written and edited for some of the country’s most prominent media brands. He’s the former national president of the Society of Professional Journalists, a two-time Pulitzer juror and a Fulbright Fellow.