Tabitha Brown calls for the end of code switching

As we celebrate Juneteenth, the vegan foodie shares her thoughts on what freedom looks like for Black people.

In honor of Juneteenth, theGrio’s Natasha S. Alford asked vegan foodie Tabitha Brown what she believes freedom looks like for Black people in 2022.

“I really would like to see code switching disappear,” she said. “I was a person who code switched for the majority of my life, covered my accent or tried to fit in and be a certain way to be accepted, but that’s not freedom.”

Brown, who has risen to stardom because of her authenticity, is a living representation of finding success in being yourself. She has encouraged people to embrace their roots and families, and to show up to the office, or whatever space they occupy, as themselves. 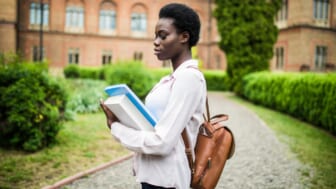 Brown also said that when she is being unapologetically herself, she is honoring God and respecting how He created her.

“Showing up as anybody other than me is saying He didn’t do a good enough job,” she said. “But, when I show up as Tab, who he created, I’m honoring him [by] saying, “I appreciate you. I’m who you made me to be.”

Watch the full video above.