Jones, who currently represents New York’s 17th Congressional District, told theGrio that having the opportunity to represent the 10th District would be a full-circle moment.

Nearly two years ago, U.S. Rep. Mondaire Jones (D-N.Y.) did what he thought was impossible when he was elected as the first openly gay Black member of the United States Congress.

“I never imagined someone like me could run for Congress, let alone get elected,” Jones told theGrio during a recent interview.

After the court-ordered redrawing of New York’s congressional map, Jones – who currently represents New York’s 17th Congressional District – decided to seek re-election in a new district, the Big Apple’s 10th Congressional District, which is comprised of Lower Manhattan and parts of Brooklyn. The West Village neighborhood, where the 1969 Stonewall Riots took place and paved the way for the gay and queer liberation movement in the United States, is also in the 10th district.

If re-elected to Congress to represent the 10th District, Jones would make history, yet again, as the first openly gay member of the U.S. House to represent said district, which is steeped in LGBTQ history and thought of by some as the bedrock for queer and trans equality.

Jones told theGrio that having the opportunity to represent the 10th District would be a full-circle moment. The 35-year-old lawmaker, who lived most of his life as a closeted gay man, spent his 20s in New York City neighborhoods like the West Village, where he developed the will to embrace his queer identity.

“This district has given so much to me,” said Jones. “It is a district where I have not only worked, but a district that made me into the person I am today.”

He recalled seeing queer people, particularly Black queer people, embracing their “authenic lives,” which ultimately gave him the courage to do the same. “And I’ve never looked back since,” said Jones. 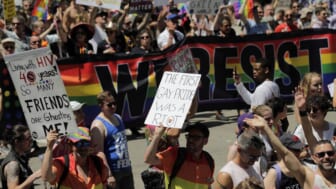 Also Read:
Pride parades march on with new urgency across US 

Since being sworn into office in 2021, not only has he championed LGBTQ rights by voting with House Democrats to pass the Equality Act – which would expand the Civil Rights Act of 1964 by barring discrimination based on sexual orientation and gender identity – he’s also pushed for health-related policies such as one that would allow for free access to the HIV-prevention drug, PrEP. Jones noted that lack of access to health care options like this “has a particularly devastating impact on our members of the Black and brown communities.” The lack of “high-quality” healthcare for Black, brown and queer communities is also why the congressman continues to support Medicare for All.

But another potential barrier for the LGBTQ community Jones said he is ready to fight for is the potential stripping away of marriage equality and same-sex intimacy.

In a Supreme Court opinion from Friday’s Dobbs v. Jackson ruling that overturned the constitutional right to an abortion, Justice Clarence Thomas signaled that the conservative majority in the high court should also revisit other precedent cases that granted fundamental rights for same-sex marriage and contraception.

Thomas’ concurring opinion in the Dobbs ruling sent shockwaves across the LGBTQ community, which was granted the right to marriage by the Supreme Court in the 2015 case, Obergefell v. Hodges. In the 2003 case, Lawrence v. Texas, the court also ruled in favor of same-sex intimacy, which was once illegal due to state sodomy laws.

Jones, who has emerged as a rising progressive voice in the Democratic Party, has consistently called for the end of the Senate filibuster in order to pass key legislative bills like the Equality Act, as well as voting rights, police reform and gun safety bills. Jones also co-sponsored a bill that would expand the 9-member Supreme Court to 13 seats – a progressive stance that hasn’t gained much mass support among Democrats.

“[The Supreme Court] has same-sex intimacy in its sights and so much more, and we just cannot afford for the gains that we have made to be rolled back.” He added, “Progress must be fought for and protected.”

Jones said his progressive values and will to fight for America’s most vulnerable communities is rooted in his childhood in upstate New York. The Spring Valley native was raised by a single mother who worked multiple jobs to support him. Despite her hard work, his mother still relied on public housing assistance and food stamps, as well as the support of his grandparents who helped raise him.

“For me, policy is personal. And I feel an urgency that too many of my colleagues still don’t feel,” Jones told theGrio.

The congressman, who was previously named the most active freshman member of Congress, believes his unique experience at the intersection of race, sexuality and socioeconomics is what will aid him in his quest to win the district’s crowded Democratic primary race that includes former New York City Mayor Bill de Blasio.

“This district deserves a progressive champion with a track record of actually delivering results in office,” said Jones. “I’m looking forward to making my case that I need to continue to bring change to Washington and to be a leader when it comes to issues of defending our democracy.”

A few weeks ago, Jones’ passion was on full display when he delivered a now-viral speech during a House Judiciary Committee hearing on gun violence in the aftermath of the mass shootings in Buffalo, New York, and Uvalde, Texas. Jones recalled being 11-years-old when 12 students and one teacher were tragically murdered in the 1999 school shooting in Columbine, Colorado.

“I was afraid – all of us were,” said Jones during his five-minute committee remarks. “But still I had hope that by the time I was in high school, nothing like the shooting at Columbine would ever happen again.”

He added, “I had faith that adults would step up. I never imagined that mass shootings, let alone school shootings, would become our new normal.”

An emotional Jones lambasted the Republican Party for its decades-long attempt to block gun reform laws, saying, “My generation and the generations who have followed know that this epidemic of gun violence is not unstoppable. It is a choice.”

While the U.S. House has since passed a modest, bipartisan gun safety bill that President Joe Biden signed into law on Saturday, Jones told theGrio that Congress must also ban assault weapons, or as he called them “weapons of war.”

He yet again stressed the need to abolish the Senate filibuster, telling theGrio, “We’ve got to do what it takes because we know we’re not going to get 10 Republicans of good conscience.”

Ultimately, Jones said, whether it’s the fight for gun safety, voting rights or LGBTQ equality, he is proud to have “shifted the conversation” in Congress on important issues to “save our ailing democracy from the threats of the far right.” 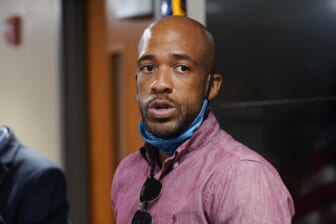 During New York City’s first Pride Month parade since the start of the pandemic, Congressman Jones took to the streets to celebrate with New Yorkers. “This Pride Month is a time to celebrate all the progress that the LGBTQ community has made over the years,” he told theGrio. Jones said he still marvels at the influence his historic election to Congress may have on younger generations.

“I didn’t have images growing up of queer people and sort of respected in public life, whether on television or in politics. And I certainly didn’t see queer people of color in those roles,” he said.

Being that representation, he said, is “deeply transformative for people who are not yet courageous enough to live authentic lives.”

“Now I’ve gone on to inspire other people,” he added. “It’s really a joy.”