During his victory speech, Jackson thanked his mother and famous father, and vowed that "the South Side is going to Washington, D.C. with me."

The seat, to be vacated after longtime U.S. Rep. Bobby Rush retires at the end of his term in January 2023, is a Democratic stronghold, therefore Jackson is expected to easily win in the general election. The 1st District, which is comprised of Chicago’s South Side, is majority Black and has been electing a Democrat since 1935.

During his victory speech, Jackson thanked his mother and famous father and vowed that “the South Side is going to Washington, D.C. with me.”

“The South Side has been left behind,” said the 56-year-old activist and former national spokesperson for Rainbow PUSH Coalition. “I want you to know the South Side of Chicago matters.” 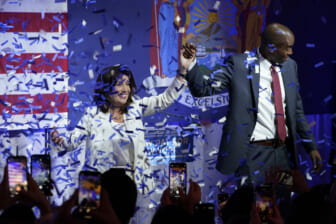 Jackson said on the campaign trail, voters pleaded, “Don’t forget us.” He added, “I’ve been taught to lift as I climb.”

If elected in November, Jackson will be the second member of his family to go to the U.S. Congress. Jesse’s other son, Jesse Jackson Jr., served as the U.S. representative for Illinois’ 2nd Congressional District from 1995 to 2012. However, Jackson Jr. resigned days after he was re-elected for his third term after an ethics investigation was launched into his misuse of campaign funds. He pled guilty to charges of fraud and conspiracy, among other charges.

Jackson said he wants to attend to the needs of the 1st District, which he said: “is in pain.” In an interview with Fox 32 Chicago, he said, “I’ve seen this pain rising across the city in the region, even the nation.”

The Democratic nominee cited the fight to protect voting rights, community gun violence and declining wages as his key priorities. Speaking about the legacy of his family, Jackson said going to congress is “another opportunity to be of service.” He added that his parents were supportive of his run and participated in his campaign.

“My mother and father stayed energized and were excited,” said Jackson.

The 1st Congressional District has been represented by Rep. Rush since 1993. The 75-year-old announced his retirement earlier this year, citing a desire to spend more time with his grandchildren.

Rush endorsed Jackson’s opponent in the race, Karin Norington-Reaves, the former CEO of the Chicago Cook Workforce Partnership. Norington-Reaves came in third place with 14.1% of the vote. Jackson topped the 17-person race with at least 28% of the vote, according to The New York Times.