In county where a cop killed George Floyd, the next sheriff will not be a white man

Maj. Dawanna Witt, a veteran of the Hennepin County Sheriff's Office, is seeking the top job, as are a former police chief and a third candidate with a long career in law enforcement.

The three candidates in the running for the job are either Black or of South Asian descent. Hennepin County’s sheriff has been a white man dating back to 1852, according to the Minneapolis Star Tribune.

The candidates are Maj. Dawanna Witt, a veteran of the Hennepin County Sheriff’s Office; Joseph Banks, the former police chief of Morton, Minnesota, and ex-acting chief of the Lower Sioux Indian Community; and Jai Hanson, a South Asian American who has 20 years of experience in law enforcement.

Sheriff David Hutchinson is leaving the job after a single term. He pleaded guilty in December to misdemeanor drunken driving after crashing his county-owned SUV in Alexandria, Minnesota, following a sheriff’s convention. He is on medical leave until his term ends.

“Some say keep race out of it,” said Witt. “I’m proud to be a Black woman. And I just might happen to be the first Black female sheriff the county has ever had.” 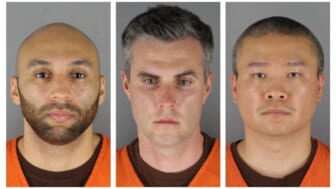 Witt said that if elected, her priorities would include targeting violent crime, supporting police departments with community-specific issues and creating programs for jail inmates that focus on substance abuse, mental health and acquiring employment. She also hopes to improve deputy retention.

Banks, who also is Black, said Hutchinson’s actions have cast a cloud over the office. “If the top cop is not following the rules, what do his subordinates think?” he wondered aloud. “People are human, but you have to make smart decisions at that level of law enforcement.” 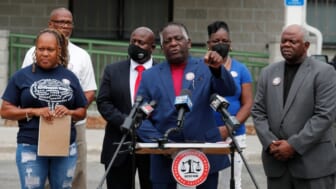 Hanson also wants to see the county undertake some preventive actions including buying abandoned houses and renovating them as meeting places where children can go after school to receive tutoring and feel safe.

All three candidates say they would be honored to be the first sheriff of color in Hennepin County and noted that the police killing of Floyd has also cast a pall over the embattled county.

“George Floyd taught us,” Banks told the Star Tribune, “that officers need to slow things down.”