"This project is something that we know is the right thing to do," Charlotte Mayor Vi Lyles said at Thursday's street renaming event.

A historic neighborhood in Charlotte that was destroyed nearly 60 years ago as part of an “urban renewal” plan has been reclaimed. Thursday morning, former residents and current supporters celebrated the renaming of Stonewall Street — originally named for Confederate general Thomas “Stonewall” Jackson — to Brooklyn Village Avenue.

Nine streets in Charlotte were renamed by the city’s Legacy Commission, composed of historians, journalists and public officials, and formed in June 2020 during the summer of racial reckoning to examine “street names, monuments and other markers” honoring white supremacists, Confederate Army figures and noted slave owners, according to The Charlotte Observer.

Each of the nine streets that got new names formerly had the monikers of Confederate generals. The new Brooklyn Village Avenue was the final road renaming.

In the 1960s and ’70s, more than 1,400 buildings in the bustling Black neighborhood in Charlotte known as Brooklyn were demolished, and over 1,000 of its families were displaced in the name of progress. Brooklyn’s Second Ward High School was demolished, and many of its former students created an alumni organization to celebrate its heritage.

“This project is something that we know is the right thing to do,” Charlotte Mayor Vi Lyles said at the renaming ceremony. “It’s proof that we can look at ourselves, be critical of the mistakes of our past, and move forward in a different direction — a direction of inclusion.”

In addition to its new name, Brooklyn Village Avenue will also soon have a new 17-acre mixed-use development that will “create a future blend of residential, office, retail, cultural and public space to enhance the landscape of Uptown Charlotte,” according to the official website. 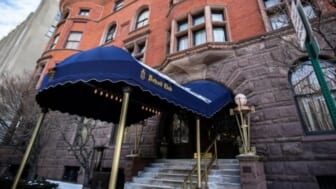 Members of the Second Ward High School National Alumni Foundation — all graduates of the campus — were on hand at Thursday’s ceremony.

“For almost 50 years, this organization has been in existence,” foundation member Arthur Griffin told The Observer, “trying not only to keep the memories of Second Ward alive, but also the Brooklyn community alive.”

“Brooklyn was more than a place,” he said. “Brooklyn was a lifestyle, an attitude. Brooklyn had a soul … Second Ward was the lifeblood, it was like the River Nile for all of us who experienced that.”