The multi-talented entertainer will be honored on July 15 for her contributions to television.

Jenifer Lewis will receive a star on the Hollywood Walk of Fame. The Walk of Fame announced that the ceremony for the acclaimed actress will be on July 15.

Lewis’ will be the 2,726th star on the Hollywood Walk of Fame. She will be honored in the television category. Before her eight-season stint on ABC’s hit sitcom, Black-ish,” Lewis appeared in numerous television series, including “A Different World,” “The Fresh Prince of Bel-Air,” “Friends,” “Rugrats,” “Girlfriends” and “American Dad.”

In addition to her television work, Lewis has appeared in many films, including “What’s Love Got to Do With It,” “Beaches,” “The Preacher’s Wife,” “The Princess and the Frog” and “Think Like a Man.” She is currently starring in the Showtime series, “I Love That For You.” She has also performed on stage, acting and singing and wrote a bestselling autobiography, “The Mother of Black Hollywood.”

Using her platform, Lewis has given her support to several charities and causes. Among them are the Human Rights Campaign, the Los Angeles LGBT Center, the Coalition for At-Risk Youth, the Urban League, the EWOC Foundation: Exceptional Women of Color and Broadway Cares/Equity Fights AIDS. 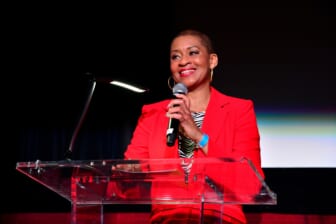 “Jenifer Lewis is considered a national treasure and a force to be reckoned with. She is one of those performers who always keeps the audience on their toes,” said Ana Martinez, producer of the Hollywood Walk of Fame. “I placed Jenifer’s star next to one of her all-time favorite actresses, the legendary Katharine Hepburn. Those ladies are two peas in a pod, as both delved in Human Rights activities and are known to be as feisty as all get out!”

The Hollywood Chamber of Commerce has been the Walk of Fame’s administrator since 1960. The Hollywood Walk of Fame celebrates artists and entertainers and a committee of their peers selects honorees.