At Blerdcon, Black nerds see themselves and find their tribe

Blerdcon co-founder Hilton George talks to theGrio about how he infuses the culture into nerdom.

Somewhere in Bunkie, Louisiana, there’s a 19-year-old Black man in the backroom of his grandmama’s white clapboard house hiding his Sith Lord mask and Gundams. He just wants the matriarch and her deaconess friends to stop praying for the devil to let him go.

Something similar plays out in Corvallis, Oregon. Only this time, it’s not age or Big Mama’s religion restraining her spirit. It’s race. And gender. Corvallis has a Black population of just 1.3%, and the 26-year-old cosplaying physics teacher who loves comic books just wants to stop feeling “other.”

That’s why, six years ago, along with Hassan Parrish, Hilton George co-founded Blerdcon – the only convention that marries Blackness and nerdiness, saturates geeky with the culture and  creates a welcoming environment for people who feel that their interests keep them on the periphery of their kin and colleagues.

“We in the Black community have not resolved our relationship with nerdom and whiteness,” said George, the Blerdcon CEO, who spent 20 years in education before leaving his job to launch Blerdcon. “Oftentimes Black nerds don’t have to just turn in their cool card as all nerds often do. They have to turn in their Black card, too,” he told theGrio.

That is, until they get to Blerdcon. This year’s event runs July 8 -10 in Arlington, Virginia, where organizers expect  8,000 to 10,000 unique attendees and 20,000 turnstile Blerds at the Hyatt Regency in Crystal City. It’s all things nerd for 24 hours a day. From noon Friday until 4 p.m. Sunday there will be nonstop anime screenings in the theater, RPG (that’s role playing games) and tabletop gaming, an AMV (anime music video) contest, cosplaying, an arcade and a maid cafe (an experience popular in Japan in which servers dress as maids).

And most importantly, it’s unquestionably, overwhelmingly Black. Just how Black? Well, there’s a barber shop. Mic drop. Enough said, really. However, there’s more, such as a band and a man synonymous with a drumline.

Add to that a comedy show, spades tournaments (UNO, too, if you’re not ready), a Blerd Funk concert stage and food trucks to nourish Black nerds. The trucks are all “curated so they have different genres of food from fish sandwiches to barbecue to ramen to pizza to vegan to Jamaican,” George said.

“We superimpose the Black experience on top of the nerd experience,” said George, who attended HBCU North Carolina Central. “There are some simple ways to do that by focusing on Black nerd guests, from cosplayers to celebrities to curating, wherever we can, Black contractors from video game tournament producers, or DJs, musicians.”

It’s features like the barbershop that are unique to this con. “That’s extremely Black,” the founder opines. “It was a risk on several levels because at the same time we’re trying to insert the Black experience … most Black people have a particular barber that they have been going to for a long time.” 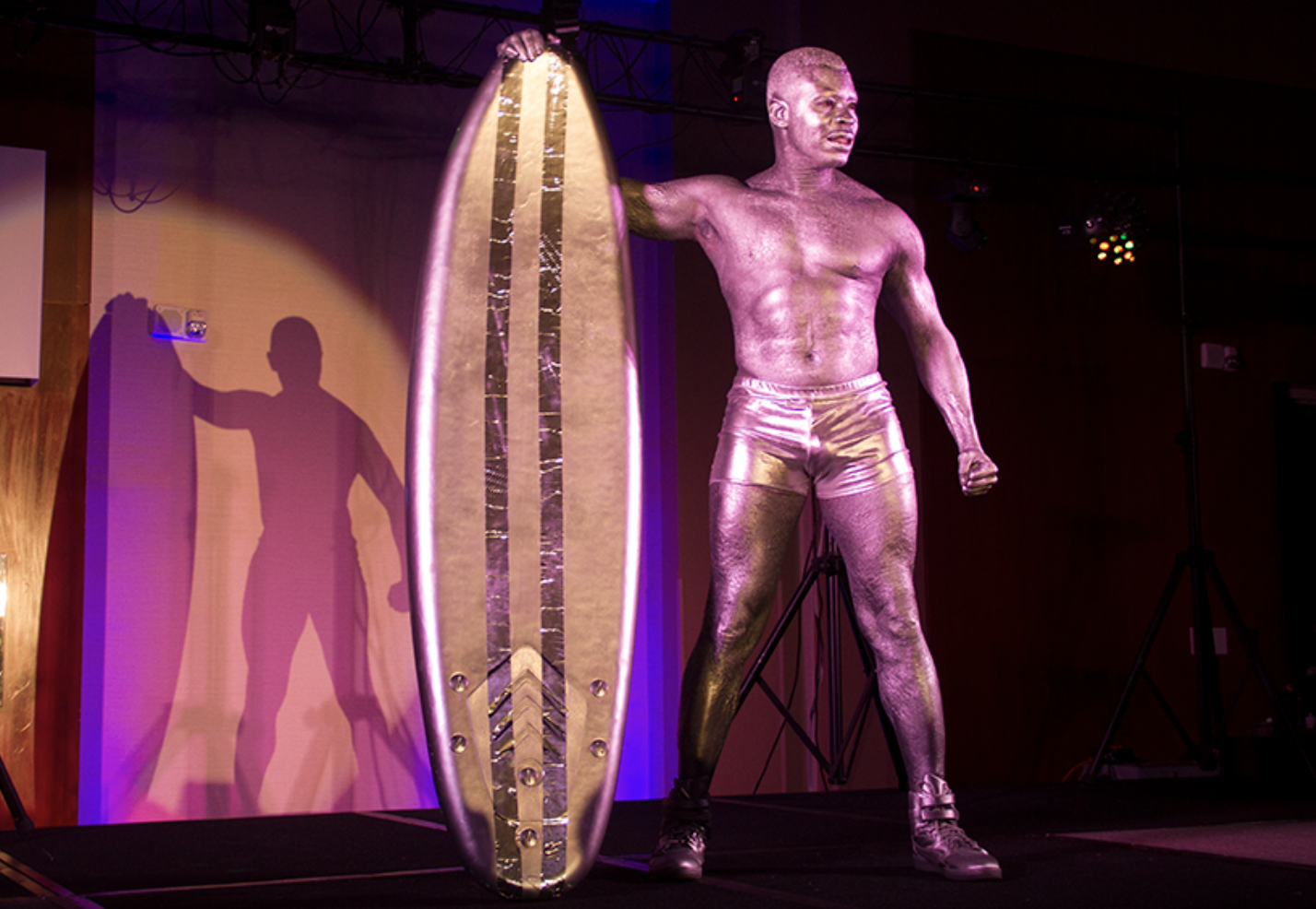 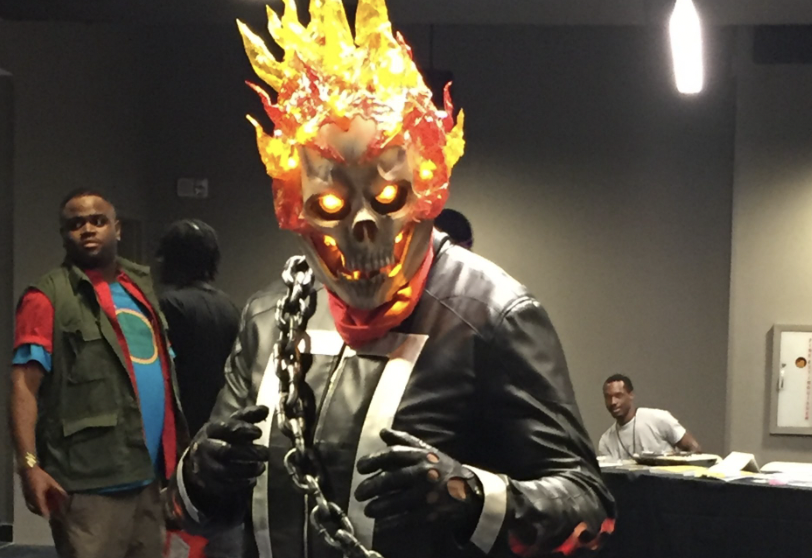 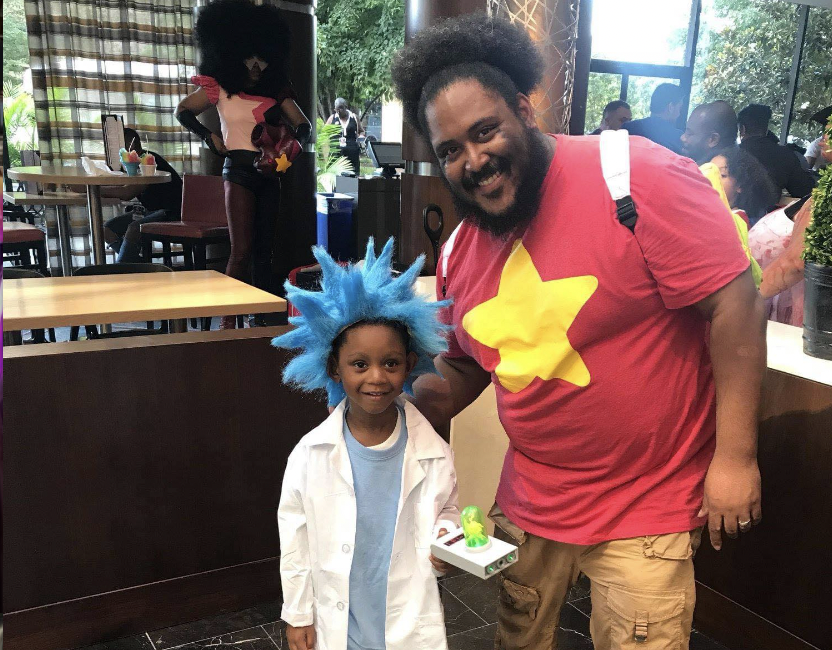 The tiny cosplayer is dresses as Rick, from animated sitcom Rick and Morty. The adult is costumed as Steven Universe from the eponymous show. (Photo credit: Blerdcon) 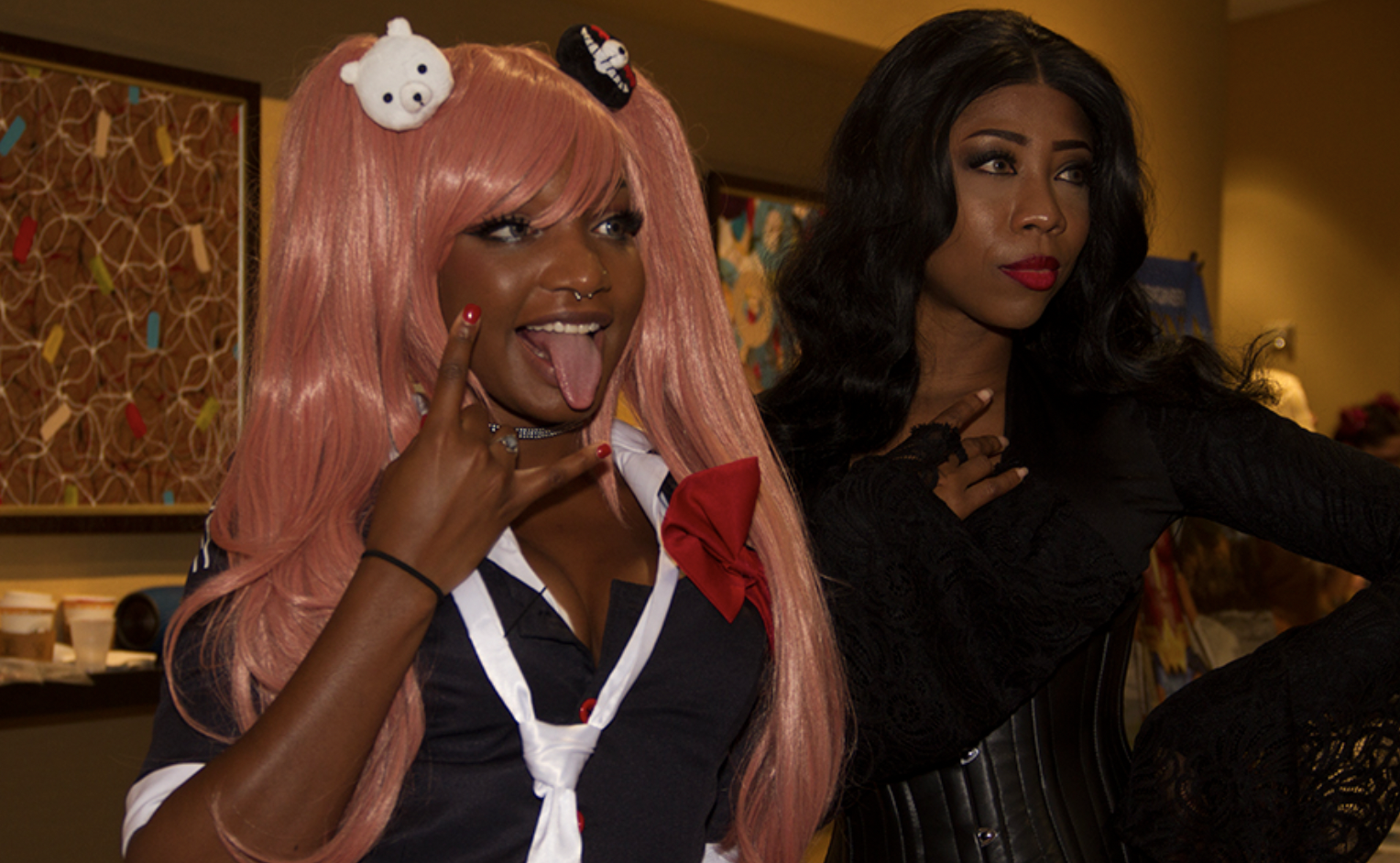 The cosplayer in the pink wig is dressed as Junko from Danganronpa, and she stands next to a Blerd cosplaying as Lust from Fullmetal Alchemist. (Photo credit: Blerdcon) 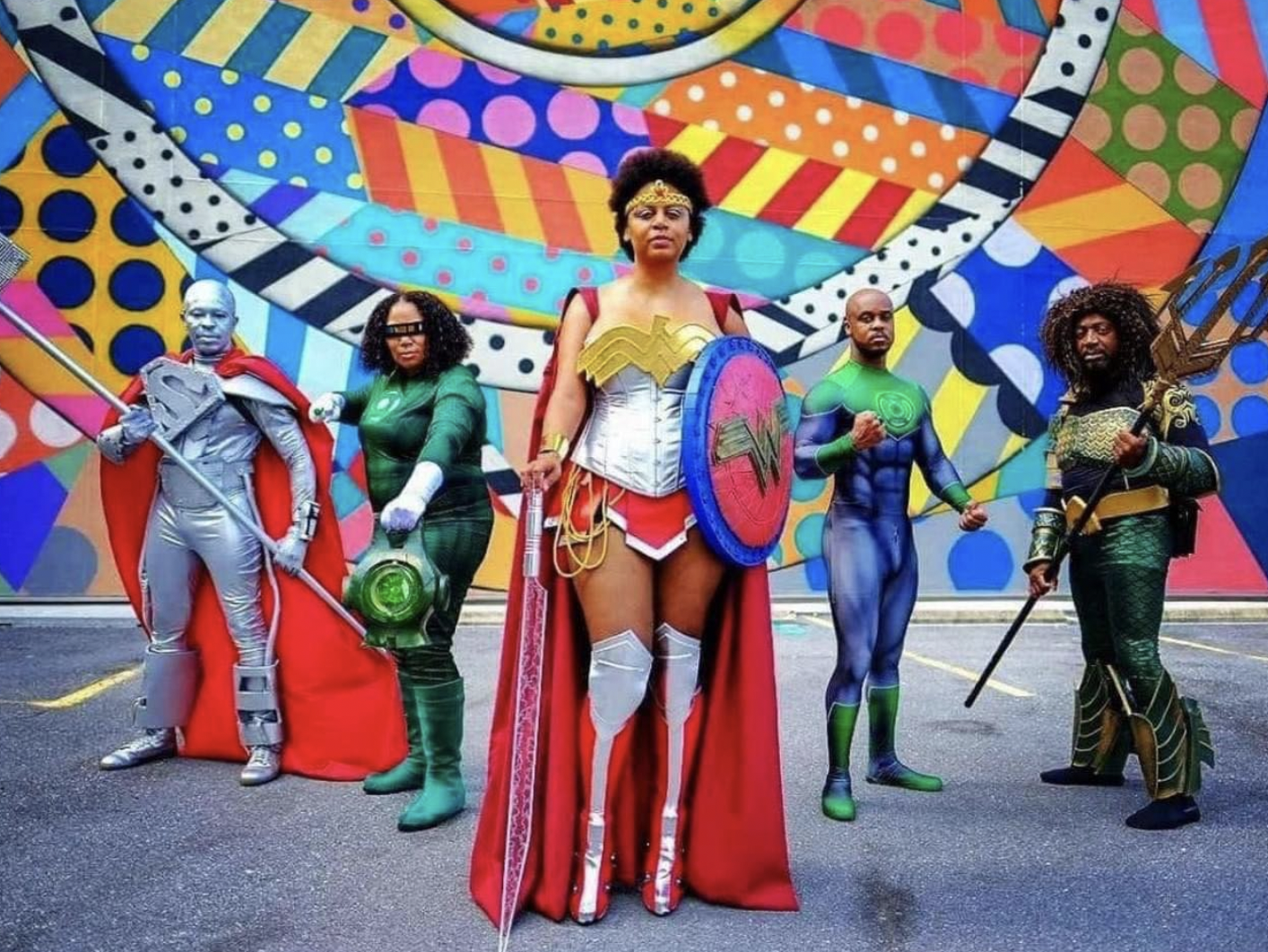 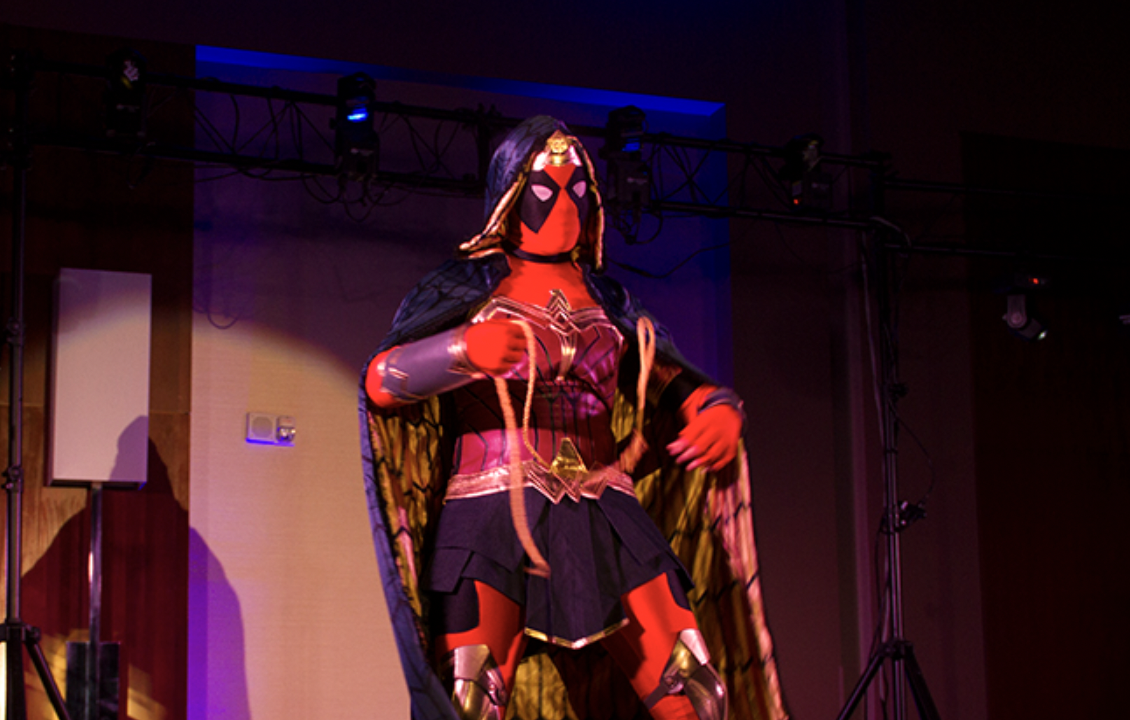 The cosplayer has combined the look of Deadpool and Wonder Woman. (Photo credit: Blerdcon) 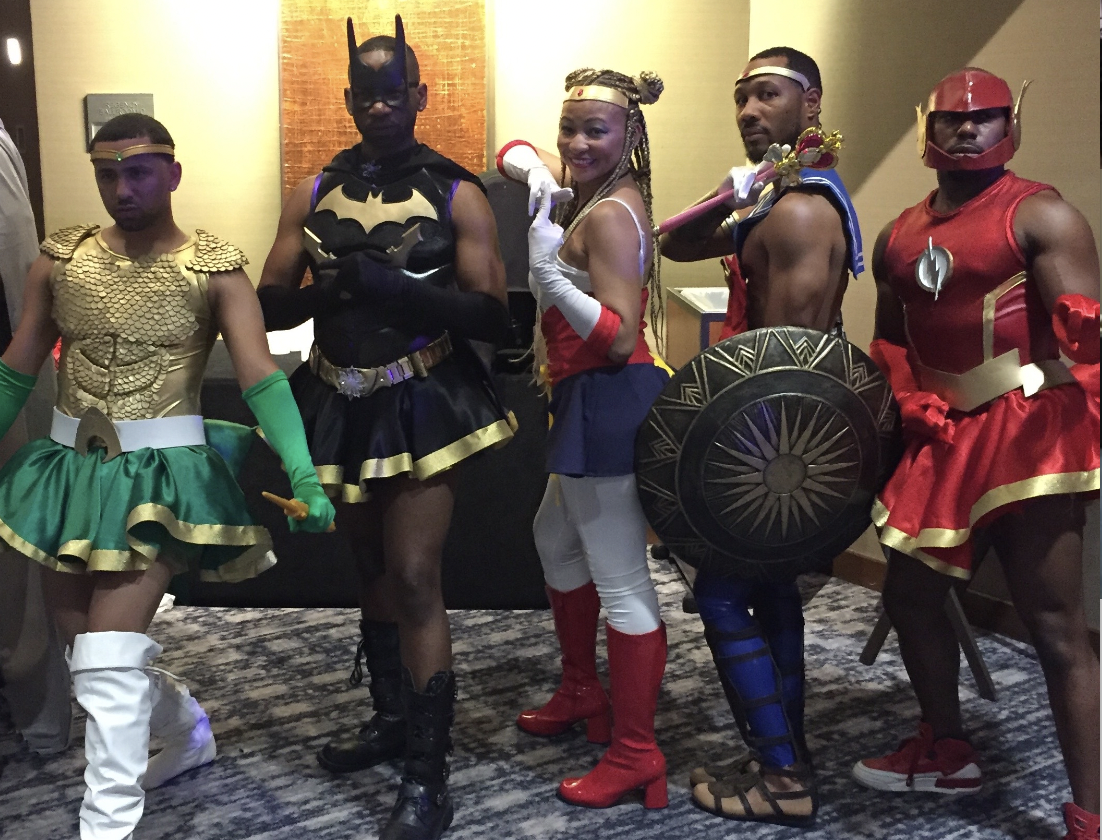 George’s gut told him that cosplayers would want fresh lines that they can’t get on a Wednesday and look like authentic characters at the convention on Saturday. “If you are looking at intricate haircuts like Blade or Aqualad, those are cuts that need to happen that morning to make that cosplay come off that afternoon,” he said. Who knew that was enough to overcome that cultural barrier and get people into a strange barber chair?

George recognizes that “nerd” also is no longer the pejorative it once was. Nerds are successful tinkerers, creatives, engineers, and even actors. Remember that time Michael B. Jordan clapped back after being ribbed for loving anime?

George and Parrish founded Blerdcon in 2016, and the first convention occurred in 2017. Since 2018, George and his team have selected a theme so anchored in the souls of Black people that it immediately conjures a cultural sentiment or memory. In 2018, it was “Reunion.” (You thought family, matching T-shirts, melting in a park and banana pudding, didn’t you?) “Blerd Magic” centered 2019. Covid prevented a con in 2020, but Blerdcon came back last year with “Chocolate City.” And this year, it’s “Homecomin’,” and Orlando Jones of “Drumline” fame is the celebrity guest.

“Homecoming” also connotes acceptance that isn’t always found or felt at home or work, George adds. “We still have older parents, grandparents who think that Dungeons and Dragons, videogaming or cosplay have something to do with devil worship or make you gay,” he explains.

For some people attending Blerdcon, it’s their first time realizing “how puckered and congested we make ourselves in white spaces sometimes,” George says. “There are a lot of people who come to Blerdcon … and it is their first time being in a space where 99% of the people are Black, and all of the things around them are resonating with the Black experience, and they feel at home with everything that is happening. So sometimes the only way they can describe it is ‘homecoming.’”