Emmett Till supporters enter N.C. senior living center searching for his accuser and demanding her arrest

An unserved warrant charging a white woman with the Black teen's 1955 kidnapping was found recently.

After an unserved warrant charging a white woman with Emmett Till’s kidnapping was found recently in a courthouse basement, family members of the murdered Chicago teenager have been calling for her arrest.

In August 1955, Carolyn Bryant claimed that the 14-year-old Till whistled at her, leading her then-husband, Roy Bryant, and his half-brother, J.W. Milam, to kill the boy. The two men — now deceased — were arrested and acquitted by an all-white jury. They would later confess to the crime.

Dozens of Till’s supporters first went to an apartment building in North Raleigh in search of the woman who now goes by Carolyn Bryant Donham and who is thought to be in her 80s, according to WRAL. In the arrest warrant, she is identified as “Mrs. Roy Bryant.” The group then made its way to a senior living facility, where one protester said, “Time to face your demons. Come on out.”

The demonstration prompted local police to respond to the scene and the center was locked down briefly. It’s unclear whether Donham is a resident of the senior home. 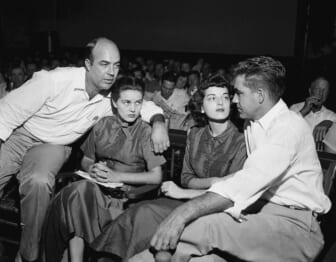 “You cannot ignore this. That is the reason why the warrant needs to be served, and it will help create change,” Till’s cousin Priscilla Sterling told WRAL. “If this is what’s needed to do for us to change our mindset, our behaviors and attitudes in the society, then this will do it. This will do it. Execute the warrant.”

Said one protester: “I do understand that Ms. Bryant is in her mid-to late-80s, but understandably, this is a crime she committed when she was 22. Sixty years later, it’s time for her to be held accountable.”

At the time, a local Mississippi sheriff declined to serve Donham with the arrest warrant, saying he did not want to “bother” her because she had two children, according to the New York Post.

Members of the Emmett Till Legacy Foundation discovered the warrant last month in the basement of a Mississippi courthouse. Dated Aug. 29, 1955 — one day after Till was murdered — the document had been placed inside a file folder in a box, and Leflore County Circuit Clerk Elmus Stockstill said it is authentic, WRAL reported last month.

The three did “willfully, unlawfully and feloniously and without lawful authority, forcibly seize and confine and kidnap Emmitt Lewis Tell,” according to an affidavit (in which Till’s names are misspelled) attached to the warrant, obtained by WRAL. The three refers to Bryant, Milam and Donham, who was then Mrs. Roy Bryant.

An earlier investigation into Till’s murder case was closed last December by the U.S. Department of Justice without charges being brought, WRAL reported.

Still, the demonstrators are on a mission to track down Donham with the hope that she is finally held accountable nearly 70 years after Till’s murder. 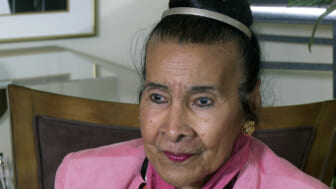 Also Read:
She converted a KKK Grand Dragon, and at 91, Xernona Clayton is still fearless

“Right now, we’re in negotiation mode … trying to put pressure on Mississippi to make sure they execute that warrant so she can be taken from Raleigh to Mississippi,” a protester told WRAL.