Soccer star Megan Rapinoe has used her platform to advocate for LGBT+ rights and equal pay for female athletes. During her most recent moment in the spotlight, while being honored for her accomplishments, she paid tribute to WNBA player Brittney Griner, who the U.S. government now says is being wrongfully detained in Russia.

Rapinoe — who won a gold medal for the U.S. in the 2012 Olympics and helped the U.S. national women’s team nab World Cup titles in 2015 and 2019 — subtly supported her fellow Olympian at the ceremony Thursday where she received a Presidential Medal of Freedom.

Along with Simone Biles, the most decorated gymnast of all time, Rapinoe was awarded her medal by President Biden in a ceremony at the White House last week. She wore a white suit with several initials stitched in white, including “BG” — specifically for Griner — on her lapel.

“The most important part of the day … BG we love you,” Rapinoe said, showing a picture of the embroidered initials in an Instagram Story. 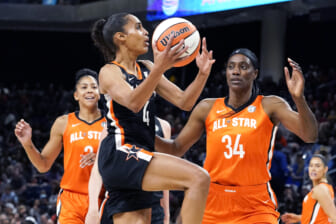 In a Russian court last week, just hours before the White House medal ceremony, Griner pleaded guilty to drug charges by saying that she’d accidentally places the vaping cartridges into her luggage when packing for Russia. Griner has won two championships playing for Russian team UMMC Ekaterinburg and was at Sheremetyevo Airport in Moscow upon arriving from New York when she was detained in February.

“This plea doesn’t change that @potus needs to and is working hard to get her home,” Rapinoe maintained in an Instagram Story. “From what I understand she had to plead to keep the process of getting her home asap in motion. BG we are with you.”

Griner sent a handwritten letter to Biden two weeks ago that White House Press Secretary Karine Jean-Pierre acknowledged he has read, per a CNN report.

“I realize you are dealing with so much, but please don’t forget about me and the other American Detainees,” Griner wrote. “Please do all you can to bring us home. I voted for the first time in 2020 and I voted for you. I believe in you. I still have so much good to do with my freedom that you can help restore. I miss my wife! I miss my family! I miss my teammates! It kills me to know they are suffering so much right now. I am grateful for whatever you can do at this moment to get me home.”

Rapinoe is among the high-profile athletes who have expressed their public support for Griner. Her WNBA teammates ceremoniously drafted her to the WNBA All-Star team at the game played at Chicago’s Wintrust Arena on Sunday. Many in the crowd supported Griner with “I am BG” T-shirts and pins, plus members of both Team Stewart and Team Wilson sported Griner’s name on their jerseys in the second half instead of their own. 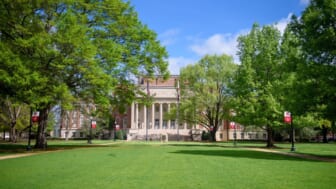 Though she was more subtle in advocating for Griner at the White House event, on social media Rapinoe was more vocal.

“This day was so beyond special and yet bittersweet knowing what is still left to be done, who is still not home, those who are still not FREE,” she said on Instagram with her hand highlighting Griner’s initials embroidered on her suit jacket. “To all of those who have come before me, walking so I could run, leading so I could follow, sacrificing so that we could fight, my deepest gratitude and heartfelt thank you.”

“Please do take this moment to ask yourself what it is you can do,” Rapinoe urged, “because we must all do whatever it is we can so that we can all be free.”