“What we need is to populate these databases with family lines” of direct descendants, making identifications of the remains possible within days, Hellwig said.

People who believe they are descendants of victims of the 1921 Tulsa Race Massacre can now provide genetic material to help scientists when they begin trying to identify remains of possible victims.

Danny Hellwig, laboratory director with Intermountain Forensics, said Wednesday that researchers are not ready to begin trying to match DNA for identification, but an outpouring of requests from local residents on how to provide genetic material led them to begin the process of accepting donations.

“That’s what prompted this,” Hellwig said. “We didn’t expect the amount of support and willingness to help… people have jumped out of the woodwork” to offer their DNA for testing.

Black people who had ancestors in Tulsa in 1921 are sought, Hellwig said.

“What we need is to populate these databases with family lines” of direct descendants, making identifications of the remains possible within days, Hellwig said.

“If we’re only matched with very distant relatives it can take much longer,” with previous efforts to make such matches taking four years or more, he said.

The Salt Lake City nonprofit foundation is examining 14 sets of remains removed from a local cemetery a year ago and has said at least two of the remains contains enough usable DNA for testing for possible identification.

The remains have not been confirmed as victims of the 1921 massacre, a finding that officials say could be impossible because of the length of time since they died.

People can provide their information from genealogy sites such as ancestry.com or 23andme.com and upload that to www.tulsa1921dna.org, but it isn’t known when the process of trying to match the DNA will begin. 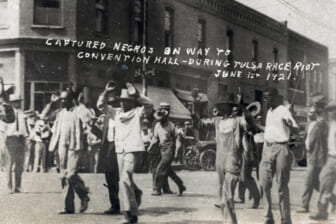 Also Read:
Teeth could help identify Tulsa Race Massacre victims if descendants give their DNA to a database

The 1921 massacre occurred when a white mob descended on Greenwood, a predominantly Black neighborhood in Tulsa. More than 1,000 homes were burned, hundreds were looted and the thriving business district known as Black Wall Street was destroyed.

A search for the graves of massacre victims began in 2020 and resumed last year with nearly three dozen coffins containing remains of possible victims recovered.

Investigators haven’t said when they’ll analyze additional sites where suspected mass graves are located, but potential search areas are planned, according to city officials in Tulsa.