The Tennessee Bureau of Investigation has been asked to probe a traffic stop that left a Black man badly beaten by police.

The Tennessee Bureau of Investigation has been asked to look into a traffic stop that left a 25-year-old Black man badly beaten by police in Oakland, Tennessee, located about 35 miles northwest of Memphis.

Oakland Police reportedly attempted to initiate a traffic stop of Brandon Calloway on Saturday for allegedly running through a stop sign and driving 32 mph in a 20-mph zone. The man allegedly did not pull over, kicking off a chase by authorities. According to Action News 5, the pursuit ended at a home on Laurel Glen Drive, where police say Calloway ran inside.

“Brandon obviously was trying to figure out, what’s going on here? Why are you guys following me? I’m not violating any law,” his attorney, Andre Wharton, told the station. “They commence speaking with Brandon or try to speak with him. He’s clueless as to why they continue to pursue him when he didn’t believe he’d done anything wrong.”

Calloway was injured in the confrontation when police entered the home, kicked in two doors, and used a taser and a baton to take him into custody.

A post shared by They call me Sunni ☀️🐩💙 (@itstiffanieb)

“All over what was reported to be, in what was alleged to have been a traffic violation,” Wharton said. “Which turns into head injuries, hospitalization and significant pain and suffering.”

In video taken while someone screams for Calloway to stop resisting, police are seen hitting the man and chasing him through the home. At the tape’s end, the person begs the officers: “Get off of his head!” 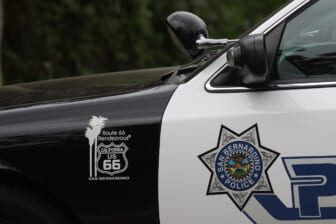 “He’s just remaining hopeful,” said Wharton, “that what happened to him will come to light, and the Oakland police and the town of Oakland and that his story will serve as an example for other police departments and other officers who are trying to do the good work of protecting and serving.”

Calloway was charged with evading arrest, resisting, disorderly conduct, failing to stop at a stop sign and speeding.

Oakland Police have offered no comment, but District Attorney General Mark Davidson has asked the TBI to investigate the arrest and use of force.