Let’s talk about cornbread, the staple at our table

Cornbread takes me back to my childhood.

It’s a Southern staple that my grandmother taught me to make. She didn’t use a round pie plate or square plan. No, no. She used a cast iron skillet that was so old I wouldn’t doubt if it was fashioned by a blacksmith in the late 19th century.

She, like any self-respecting Southern woman, had a metal can containing lard and other greases on the stove that she used for just about whatever she cooked. She used it to make everything from chicken to eggs to Jello. (OK, I’m kidding about the Jello—I think.)

But she always used it for cornbread.

She would take her well-worn skillet, place it over the heat on the gas stove, and add a scoop of that congealed, thick, grayish-brown goo into the pan. As it melted, I noticed bits of, well, stuff floating in there, bits from whatever had once lived in the grease. Bacon bits for sure. Brown bits from the chicken coating. Okra. It all made its way into the can.

She then placed the cornbread mix into the hot, black skillet and let it cook until it bubbled on the edges before placing it in the oven.

Her method produced a cornbread crunchy on the bottom and the outside (but never burned) and dense but tasty on the inside. The tasty must’ve come from all that canned grease.

I cooked my cornbread like that for a long time, telling myself it can’t be that bad for my health, just as I still pretend that extra piece of cake won’t hurt my waistline (yeah, right). 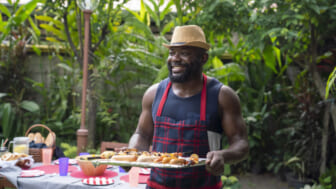 My growth as a home cook, coupled with the potential narrowing of my arteries, led me to the conclusion that I needed a cornbread recipe without lard.

So, let’s talk about cornbread.

I remember my grandmother’s simple cornbread recipe by using “one”—as in one cup each of flour, yellow corn meal, and sugar; one tablespoon each of baking soda and baking powder; one egg and one cup of milk. Easy as could be.

How much grease? The specific measure calls for a “big ole spoonful,” which depends on the cook. Sometimes my grandmother went grease wild and added more because she was the master of her cornbread domain, a place upon which no one dared tread.

It’s a recipe I used for much of my formative cooking years.

One day, I felt like having cornbread. Horror hit me when I saw I only had a half-cup of yellow cornmeal. “Whatever shall I do?” I said to myself—only using far harsher words.

After I calmed down, I thought: What if I try to make this more like a fluffy cake? A nice, light, sweet cornbread?

So I worked with what I had. 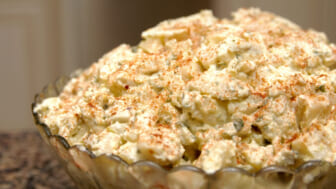 I was stunned. It was delicious. I did cook it in an eight-inch round cast iron skillet—although I placed it straight in the oven at 400 degrees because I worried the lighter mixture might burn on the stovetop. Light, airy and sweet, it was far different from my grandmother’s.

Different doesn’t mean better. My grandmother made a more traditional cornbread and the one I came up with (and have since adjusted) comes across as far more cake-like. Since we’ve already established that I love cake, I decided this would be my go-to.

Which one is better for you depends on your taste.

The standard is easy: I cut the sugar down to ¾ cup and add ¼ quarter cup of bourbon honey for additional sweetness. (If you don’t have bourbon honey just slip in a tablespoon of bourbon.) My batter tends to be fairly thick so you can adjust the milk and add a tiny bit more if you like.

The kicked-up version might make you the cookout favorite.

I dice four medium jalapeños (without seeds) and then cook one pound of bacon in a cast iron skillet (of course) until crispy, reserving the drippings. I remove the bacon, crumple it, and then mix it and the diced jalapeños into the cornbread batter. I then pour the batter into the bacon fat and let it cook at 400 degrees for about 20-25 minutes, until the top is nice and brown.

My grandmother’s cornbread or my sweet cornbread, standard or kicked up. You can’t go wrong.