The critically acclaimed show caught the rapper’s attention when a character portrayed her in a Halloween 2020 episode.

Hip-hop icon Missy Elliott will make her debut on the Cartoon Network’s highly regarded series “Craig of the Creek.”

In the forthcoming episode titled “The Jump Off,” Craig issues a double dutch jump rope challenge to some Creek kids. The kicker is that he himself does not know how to double dutch. Elliot portrays 1989 double dutch champion Carla Frazier, a rival of Nicole, the previous double dutch queen and also Craig’s mother.

The airdate has yet to be announced, according to Warner Media.

Elliott tweeted about the Emmy-, GLAAD- and NAACP Image Award-nominated “Craig of the Creek” after the character Nicole dressed up as her in the “Trick or Creek” episode in October 2020.

“I am so humbly grateful,” Elliott wrote on Twitter. In response to that tweet a fan wrote, “Beyond amazing to see the culture I grew up on come full circle for my kids to enjoy.”

Now in its fourth season on Cartoon Network, “Craig of the Creek” follows precocious pre-teen Craig Williams and his friends, Kelsey and J.P., on their adventures at the neighborhood creek in their fictional suburb of Herkleton, Maryland. 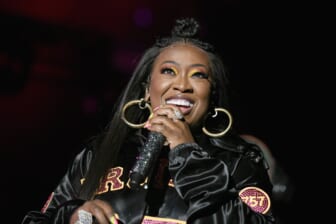 Warner Media, the parent company of Cartoon Network, announced last year that a show about Craig’s sister — “Jessica’s Big Little World” — is in development. It will air on the Cartoon Network under the programming block Cartoonito. The show “follows Craig’s bright, independent, spirited little sister, Jessica, as the Creek’s favorite first-grader embarks on adventures of her own,” the announcement states.