The film stars Danielle Deadwyler as Mamie Till Mobley and Jalyn Hall as Emmett Till and features Frankie Faison, Haley Bennett and Whoopi Goldberg.

Chinonye Chukwu has unveiled the first official trailer for the upcoming film, “TILL,” and the riveting sneak peek already has us captivated.

The director who received top honors for her film, “Clemency,” at the Sundance Film Festival in 2019 also released a director’s statement that describes how she approached the task of telling this heartbreaking true story and why she chose not to depict the gruesome visuals of Emmet Till’s lynching in the film.

When I was approached to write and direct a story about Emmett Till, I found myself drawn to a singular figure at the center of his orbit. I saw an opportunity to subvert expectations and approach the narrative through another lens — from the maternal point of view of Mamie Till Mobley. Had it not been for Mamie, her son’s memory would have evaporated into thin air. She was the catalyst for a modern day civil rights movement that has laid a formidable framework for future activists and Freedom Fighters. I felt compelled to champion Mamie’s legacy and center her in the spotlight where she rightfully belongs.

Mamie’s untold story is one of resilience and courage in the face of adversity and unspeakable devastation. For me, the opportunity to focus the film on Mamie, a multi-faceted Black woman, and peel back the layers on this particular chapter in her life, was a tall order I accepted with deep respect and responsibility.  On the daily, Mamie combatted racism, sexism, and misogyny, which was exponentially heightened in the wake of Emmett’s murder. Mamie did not cower. Instead, she evolved into a warrior for justice who helped me to understand and shape my own similar journey in activism. And as a filmmaker, showing Mamie in all her complex humanity was of utmost importance. 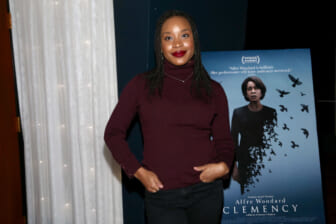 The crux of this story is not about the traumatic, physical violence inflicted upon Emmett — which is why I refused to depict such brutality in the film — but it is about Mamie’s remarkable journey in the aftermath. She is grounded by the love for her child, for at its core, TILL is a love story. Amidst the inherent pain and heartbreak, it was critical for me to ground their affection throughout the film. The cinematic language and tone of TILL was deeply rooted in the balance between loss in the absence of love; the inconsolable grief in the absence of joy; and the embrace of Black life alongside the heart wrenching loss of a child.

I hope viewers will empathize with the humanities on screen and see our present cultural and political realities within this film. And I hope that Mamie’s story helps us all to realize the power within ourselves to continue to fight for the change we want to see in the world, just as she did.

Check out the “TILL” trailer:

“TILL” is due out in October.