The EGOT winner credited Nichols, the "Star Trek" actress, for being the first Black person she saw who "made it to the future."

The passing of television pioneer Nichelle Nichols continues to reverberate throughout Hollywood.

On Monday’s episode of “The View,” moderator Whoopi Goldberg, a member of the “Star Trek” family, took time to honor the late Nichols, who died Saturday, crediting her for paving the way for Black talent in “space” and beyond. 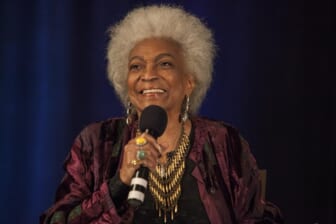 As theGrio previously reported, the “Star Trek” fan community and Hollywood at large lost a major talent over the weekend with the passing of Nichols. The actress originated the role of Lt. Nyota Uhura in the original “Star Trek” series, which aired from 1966 to 1969. Credited for breaking boundaries for Black women on screen and in sci-fi, Nichols’ impact is certainly felt by many, including Goldberg.

Referring to Nichols as “a trailblazer, a heroine and an extraordinary woman,” Goldberg said on Monday’s episode of “The View” that Nichols inspired “millions and millions of people,” including her.

“Nichelle was the first Black person I’d ever seen who made it to the future,” said Goldberg. “She was head of communications. This show and this woman was a beacon that said, ‘Yes, we’ll be there.’ And it just made me feel like that was an amazing thing, and she helped propel other women to go into space.”

“She was extraordinary,” continued Goldberg. “I was lucky enough to spend time with her over the years. She was my friend, and she’ll be missed.” 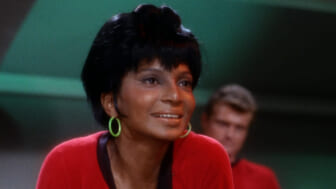 Goldberg, of course, is a part of the “Star Trek” universe herself, having played Guinan in “Star Trek: The Next Generation” and recently reprising her role alongside Patrick Stewart in the Paramount+ series, “Picard.”

Nichols’ son, Kyle Johnson, took to her official Facebook page on Sunday to share the sad news with her devoted fans and the public. He wrote in the post: “Last night, my mother, Nichelle Nichols, succumbed to natural causes and passed away. Her light however, like the ancient galaxies now being seen for the first time, will remain for us and future generations to enjoy, learn from, and draw inspiration. Hers was a life well lived and as such a model for us all.”