Domingo plays Bayard Rustin, one of the most influential figures of the civil rights movement, in the forthcoming Netflix film directed by George C. Wolfe and produced by the Obamas' company.

Colman Domingo is taking on one of the biggest civil rights leaders in a new biopic from Netflix. In the film, titled “Rustin,” the actor plays Bayard Rustin, a Black gay man whose influence changed the course of our history in the civil rights movement. 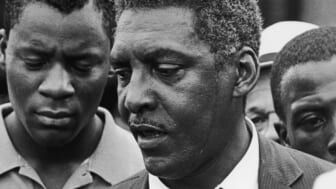 Set to premiere in 2023, the film is directed by five-time Tony Award winner George C. Wolfe and is produced by Higher Ground Productions, the company founded by the former president and first lady, Barack Obama and Michelle Obama. In addition to Domingo in the titular role, the project also stars award-winning comedian Chris Rock as Roy Wilkins, six-time Tony Award winner Audra McDonald as Ella Baker, Emmy winner Glynn Turman as A. Philip Randolph and more.

In the first look picture released by Netflix, the film recreates the moment Rustin spoke to marchers from the Lincoln Memorial at the historic 1963 March on Washington. Rustin was the strategist behind the massive demonstration.

“Bayard Rustin, the brilliant strategist behind 1963’s momentous March On Washington and close advisor to Dr. Martin Luther King, Jr., dedicated his life to the tireless quest for racial equality, human rights, and worldwide democracy,” the official synopsis obtained by theGrio details. “But as an openly gay Black man, he was all but erased from the civil rights movement he helped build. Directed by George C. Wolfe and starring Tony Award winner and Emmy Award nominee Colman Domingo, ‘Rustin’ illuminates the life of this unsung hero, a man whose influential work as an activist changed the course of history.”

This week, Domingo appeared on “The Late Show with Stephen Colbert,” and broke down the project and what it means for Rustin’s story to finally be told in this way. “It’s about a famed civil rights leader, but I wouldn’t say famed because a lot of times history books try to just, you know, put him underneath history, but Bayard Rustin actually organized the March on Washington for Dr. King. And I’ve been gifted with the responsibility of playing Bayard Rustin.”

“It’s a beautiful moment right before the March on Washington, seeing how it got there,” he continued. “It also tells you in many ways how Bayard Rustin was the person who inspired Dr. King, when it comes to passive resistance, when it comes to many, many principles that really help us and gave us the foundation of what we have today.”