Seattle-area police responded to a possible burglary that may have been a race-based misunderstanding between neighbors.

In a Reddit video posted last week titled “A Warm Seattle Welcome,” a white woman is filmed calling 911 on a Black man who recently moved into an area house. She explains in the video that she was concerned that the man did not live there.

Dayson Barnes, the black man in the video,  told The Seattle Times that other neighbors noticed the U-Haul truck in front of the house when he and his partner moved in three weeks before.

“If you guys have a lease, I’d just like to see the lease,” the unidentified woman says in the video. The two men refused.

Barnes said he went inside to get his phone to film Wednesday’s interaction and his white partner came outside with him. That, he said, caused a change in the woman’s demeanor.

“I’m a Black man, and me being out there alone and for me to go inside to get my white boyfriend, she felt she was in the wrong I guess and that there was a misunderstanding,” Barnes said Friday. “I did get the sense of her trying to save face for herself and brush it under the rug … It was obviously a race thing.”

When deputies from the King County Sheriff’s Office arrive, the men tell authorities the woman was harassing them, which she denies, asserting her call “has nothing to do with race.”

Barnes dismissed her claims. “I was standing in the backyard, and she perceived me as some thug,” he said. “I was wearing a hoodie because it’s cold that morning, a black hoodie, and she thought I shouldn’t be there, I was stealing from the house.”

The video ends with the two men talking to the police, but does not show how the issue was resolved.

According to The Times, police officers responded “to reports of a potential residential burglary.” Zoe Birkbeck, a King County Sheriff’s Office spokesperson, addressed the call via email. “Before arriving on scene, dispatch advised responding deputies that the caller said that it was a misunderstanding however now a verbal disturbance had ensued,” 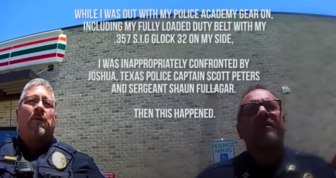 The incident with the young woman began on Wednesday, at around 11:30 a.m., according to Barnes’ account in The Times. He initially waved at the woman as she drove by their home. However, she looped around and parked in front of the house. When Barnes approached to ask her whether she was OK, she told him that she knew the family who lived there, and he was not supposed to be there, then she called the police, which is when the video begins.

“I didn’t think I’d have to experience this outside of the South,” said Barnes, who moved to Washington from Texas where he said he was often racially profiled. “I left the South to make these things obsolete.”