The photographer's series of reimagined selfies will be on display at a Houston museum until mid-January 2023.

Photographer Samuel Fosso transforms into more than a dozen 20th-century Black freedom leaders for a new exhibit at The Menil Collection.

As reported by The Houston Chronicle, the Fosso show — which consists of 64-inch by 48-inch gelatin silver prints of each portrait — will be on view at The Menil through Jan. 15, 2023 in conjunction with FotoFest 2022, an event slated for Houston next month.

“I made this series so that more people can understand the history of these important figures,” the photographer said in a news release museum officials furnished, “and to share the thirst for democratization, which is also at the foundation of the Menil’s fabulous collection.”

Fosso was 13 when in 1975 he opened his own commercial portrait studio — Studio Photo National — according to the release. He would display self-portraits to promote his business until he landed his first show in 1994: the inaugural Rencontres Africaines de la Photographie exhibition in Bamako, Mali. Afterward, his photography quickly gained international recognition.

Fosso’s images can be found in numerous museum collections, including the Museum of Modern Art in New York City, the Philadelphia Museum of Art and Tate Modern in London.

“The African Spirits series points to Fosso’s artistry at picturing transformative moments in the lives of luminary figures,” said Paul R. Davis, curator of collections at The Menil. “His subjects represent the cultural and spiritual tissue connecting liberation movements in the U.S. and those on the African continent.” 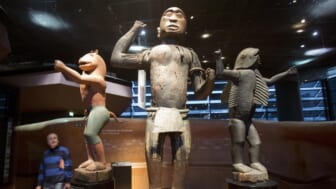 Davis admitted to the Chronicle that he enjoys watching visitors’ reactions. “They know the photographs,” he said, noting their surprise when they realize Fosso appears in each image.

“Fosso’s reinterpretations of these historic photographs pay homage to the figures in the original images,” The Menil said in a news release, “and raise questions about individuality, celebrity, the media, and the complicated history of representation.”