If anyone can bring about change, it’s the Rev. Jesse Jackson, and that was the veteran activist’s intention when he met Thursday with the CEO of SeaWorld Parks & Entertainment, owners of Sesame Place, to talk about the recent accusations of racism leveled against the Philadelphia-area theme park.

According to The Philadelphia Inquirer, Jackson met with CEO Marc Swanson in New York City to address racism claims that surfaced after video went viral that captures a costumed character at Sesame Place appearing to dismiss and ignore at least two Black children.

SeaWorld board members and attorneys and B’Ivory LaMarr, the lawyer for the family of Jodi Brown — who, last month on social media, shared cellphone video showing a SeaWorld employee costumed as the turquoise Muppet Rosita refusing to high-five her daughter and niece, both 6 — were also present at the introductory meeting.

“These children are bearing the burden of this racial incident,” Jackson said, according to Fox 29 News. “Two children were affected directly by this.”

During a news conference following the meeting, Jackson was questioned about the sincerity of Sesame Place’s repeated apologies. He replied, “Trust, but verify,” according to The Inquirer, a phrase popularized by President Ronald Reagan when discussing negotiations with the Soviet Union. 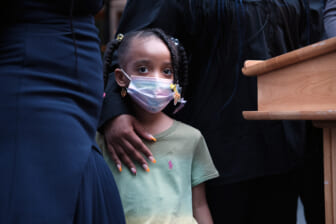 Jackson said Sesame Place needs to undergo significant changes, even at the highest levels, to truly reflect its commitment to diversity and inclusion.

As previously reported by theGrio, Sesame Workshop, the nonprofit company behind “Sesame Street,” has promised to offer bias training following the revelation of the video from multiple sources across social media.

“Sesame Workshop is aware of the recent incident at Sesame Place Philadelphia, which we take very seriously. What these children experienced is unacceptable,” Sesame Workshop said in a statement shared on Twitter. “We will continue working with our long-term partner Sesame Place to ensure that appropriate actions are taken and that incidents like this do not happen in the future.”

​​The theme park reiterated that commitment on Tuesday, saying that diversity and inclusion training — which will be held for new hires and become a regular component of workplace development — will take place by the end of September, The Inquirer reports.

LaMarr said that the Brown family prefers dialogue over litigation, noting that Sesame Place’s executives have agreed to meet with the Brown family within two weeks to continue discussions.

“We are committed to making sure our guests feel welcome, included and enriched by their visits to our park,” Cathy Valeriano, president of Sesame Place Philadelphia, said in a statement.