Data shows that fewer than 150 Black women fly professionally in the U.S., which represents less than 1 percent of all pilots.

Some may find it difficult to believe that in 2022, we’re still commemorating the “first Black” anything, but American Airlines recently made history with an all-Black female crew for the first time in the carrier’s 96 years.

CBS News reports that American Airlines Flight 372 from Phoenix, Ariz., to Dallas honored Bessie Coleman, the first African-American woman to receive a pilot’s license, to celebrate the 100th anniversary of her first public flight in the United States. The American Airlines flight marked the first occasion in which every single crew member involved—from the ground crew all the way up to the cabin—was a Black woman.

Gigi Coleman, the pioneering aviator’s great niece, was among the passengers on the celebration flight. She also oversees Bessie Coleman Aviation All-Stars, a Chicago-based afterschool program designed to encourage youth, particularly of color, to pursue their dreams of flying.

“I think she [Bessie Coleman] would’ve been really amazed and in awe,” Coleman said, as reported by CBS. “I was in awe, and this is 2022.”

According to the National Women’s History Museum, Bessie Coleman was rejected by several schools in the United States because she was Black and a woman, yet was eventually admitted to the Caudron Brothers’ School of Aviation in France. On June 15, 1921, she made history as the first Black woman to obtain a pilot’s license. She pushed women and African Americans to learn to fly while touring the nation and providing flying demonstrations until her death in a plane crash on April 30, 1926.

“My great-aunt received her license two years before Amelia Earhart,” Gigi Coleman said, according to CBS. “She wasn’t in the history books. No one knew about her.” 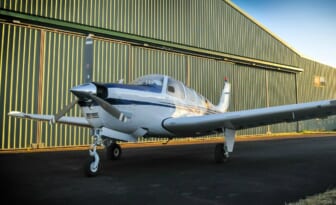 Fewer than 150 Black female pilots fly professionally in the U.S., which represents less than 1 percent of all pilots, according to advocacy group Sisters of the Skies. The nationally renowned organization is designed to increase the number of Black and brown female pilots in professional flight decks in both military and commercial aviation.

“Representation matters,” SOS co-founder Nia Gilliam-Wordlaw told Flying magazine. “I mean, I was desperate enough to ditch school to see [Janet Harmon Bragg], a dead woman, just because she looked like me and was a pilot. It’s serious.”

In contrast to the Federal Aviation Agency, SOS maintains a database on the racial and ethnic backgrounds of airline transport pilots who possess flying certificates in the U.S.

“In our network, our numbers are so small, it sounds crazy, but yes, we do all know each other, and it’s very easy to keep track of those numbers,” said Angel Hughes, SOS’s other co-founder.