"It's life or death," says Katori Hall, creator and showrunner of "P-Valley," who intentionally represented the difficulty of leaving violent relationships.

For some fans of the hit Southern strip club show “P-Valley,” there was one storyline that left them both puzzled and outraged throughout Season Two.

The dazzling and doe-eyed stripping star Keyshawn has everything going for her: beauty, social media fans and a bright future as an eyelash entrepreneur and video vixen. But at home, she lives in terror and fear of domestic abuse from her children’s father, Derrick, her white high school sweetheart-turned-tormenter. And she struggles to leave.

“P-Valley” creator Katori Hall says watching some fans’ frustration with Keyshawn’s storyline is understandable because it’s not far from the truth.

“I understand it because in real life, we’re hard on women who are dealing with abusive relationships,” Hall told theGrio in a recent interview. “There’s always that thing of like, ‘Oh, you can just leave. Or if it was me, I wouldn’t let him do that.’ And no one knows what they will do, what they would do if they were in a relationship like that.”

Throughout both Seasons One and Two of the Starz breakout show, viewers watched as Derrick pummeled, threatened and financially manipulated Keyshawn, much to the frustration of her workplace colleague and admirer, Diamond, the security guard.  And at the end of Season Two, after finally summoning the courage to leave Derrick, there is a major plot twist, and Keyshawn’s attempt is thwarted, breaking viewers’ hearts everywhere.

Hall points out that Keyshawn’s multiple attempts to try to leave reflect the grim reality that, on average, it takes a person seven attempts to leave an abusive partner once and for all. 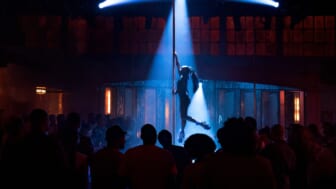 “When she does leave, it makes it even more likely that she may get killed,” Hall tells theGrio. “So people need to understand that it’s life or death when it comes to being able to step away from your abuser, and women have to have a plan in place in order to do it successfully.”

But for Hall, the real heartbreak was in seeing Keyshawn judged even after some very intentional storytelling by the writers.

“It really breaks my heart when I come across comments on Twitter, and I see people struggling with why she’s staying, even though it’s been very clear,” Hall tells theGrio. “We’ve laid it out as writers, her history kind of being a bit abandoned by her family and this young white man, kind of becoming her white knight, her Prince Charming.  Then eventually, you know, she finds out that he’s this big, bad wolf. Everyone, I think, can relate to being in a relationship with someone that you thought was Prince Charming.”

Hall’s observation is backed up by research. According to a 2014 article in Health Psychology Research, domestic abusers often switch back and forth between charming and abusive behavior, promising to change, yet never following through. 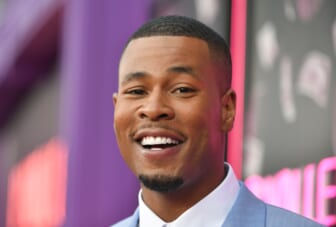 Also Read:
‘No one can prepare you to go viral on Twitter every week’: ‘P-Valley’ star J. Alphonse Nicholson talks about his role as Lil Murda

“People don’t know the psychology, the sociology, the economics of why women stay. And some men, too, to be honest with you,” she notes.

The CDC estimates that one in 10 American men “experienced contact sexual violence, physical violence, and/or stalking by an intimate partner during their lifetime and reported some form of IPV-related impact.”

The intention and care put into portraying domestic violence in the popular Starz series hasn’t gone unnoticed by its fans.

Despite some disappointment that Keyshawn suffered at the hands of her abuser, Hall suggested that “P-Valley” storytelling helped to shift hearts and minds.

“We have been able to create empathy and understanding surrounding her character by being able to reveal her back story,” she says, referring to Keyshawn’s emotional torment at the hands of her colorist stepmother and total desertion by her workaholic father.

“I think people love her more. They’re rooting for her even more,” Hall maintains. “They are angry now at the right person. They’re angry at the abuser and not her.”

If you or someone you love needs help, contact the National Domestic Violence hotline at 800-799-7233.