Franco signed an $182 million, 11-year contract in November that includes a club option for 2033.

Tampa Bay Rays shortstop Wander Franco has had a setback and was removed from his rehab assignment with Triple-A Durham on Sunday due to ongoing hand soreness.

Franco, who went on the injured list July 10 with a right hamate bone injury that required surgery, hasn’t played since leaving his first rehab game Tuesday with the soreness.

The 21-year-old Franco will return to St. Petersburg, Florida for additional treatment.

There was no timeframe announced for when Franco might be able to resume playing.

Franco took on-field batting practice for the first time since surgery on Aug. 14. After the session, he said he felt great except when taking right-handed swings. 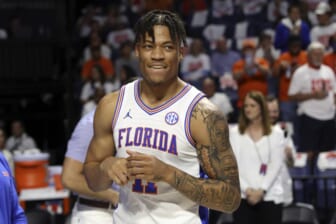 Franco also missed 23 games earlier this year with a strained right quadriceps. He has a .260 average along with five homers and 23 RBIs over 58 games in 2022.

Franco signed an $182 million, 11-year contract in November that includes a club option for 2033. The deal could be worth up to $223 million with incentives if the club option is exercised.

Franco hit .288 with 18 doubles, five triples, seven homers and 39 RBIs in 70 games last year. He finished third in the American League Rookie of the Year voting.

Franco put together a 43-game on-base streak to tie Cincinnati’s Frank Robinson (1956) for the longest in major league history among players under 21.