The film is set to debut at the Toronto International Film Festival next month and will close the New York Film Festival in October.

Get ready for Jeremy Pope and Gabrielle Union’s moving performance. The two actors star in the latest A24 film, “The Inspection,” which just dropped its first trailer depicting the story of a homeless gay man who joins the Marines after his mother disowns him.

Fans may remember Pope for his Tony-nominated performances in Broadway shows such as “Ain’t Too Proud” and “Choir Boy,” or his Emmy-nominated role in the Ryan Murphy series “Hollywood.” Now Pope stars in “The Inspection” as Ellis French, with Union starring as his mother in the film written and directed by Elegance Bratton. The project will premiere at the Toronto International Film Festival next month and will also close the New York Film Festival in October, per IndieWire.

Bratton’s film is described as “inspired by his own story, a young, gay Black man, rejected by his mother and with few options for his future, decides to join the Marines, doing whatever it takes to succeed in a system that would cast him aside,” A24’s official synopsis reads. Despite battling prejudice and grueling basic training, “he finds unexpected camaraderie, strength, and support” and gains a life-changing sense of belonging.

The trailer spends plenty of time with French as he trains in the Marines and also takes a deep dive into his estranged and complex relationship with his mother. During an intense monologue in the clip, French says, “My mom, she won’t even talk to me. Most of my friends are dead or in jail. If I die in this uniform, I’m a hero…somebody.” 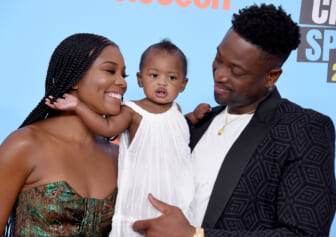 In a statement obtained by IndieWire, Bratton said, “I’m incredibly humbled that my debut feature film will close the New York Film Festival this year. So many of my favorite filmmakers have made an impact as a part of this illustrious program. I’m overwhelmed to be a part of it. And as a New Yorker, this is a dream come true.”

Union shared the trailer on her official Instagram page, expressing her gratitude for working with Bratton. “Honored to be part of this powerful film written, directed, and inspired by the life of Elegance Bratton,” she wrote in the caption.

The official release is set for Nov. 18. Check out the trailer for “The Inspection” below: