Tami Roman and J. Bernard Calloway on ‘The Ms. Pat Show,’ the art of the sitcom and more

In an interview with theGrio, the actors broke down the second season of the popular BET+ show

Tami Roman and J. Bernard Calloway are having a blast. Currently starring in the hit BET+ series “The Ms. Pat Show,” the two actors sat down with theGrio and broke down their experience on the series, the joy and art of the sitcom and what sets their show apart from others.

Returning for its second season, the “grown folks sitcom” is inspired by the life of the star of the same name and has enjoyed critical acclaim since its debut last year. The actors in the series, particularly the established ones, credit the show’s success to the hard work of the writers, performers and crew.

Roman, who plays Denise Ford, told us, “Well both J.B. and I have been in the business for a long time…for us, it’s always about the work. So when we step into the space, we read the scripts and we get on that set, it’s about delivering the best performance we can. [We’re] never really interested [in] what’s going to come after, you know, it’s about doing our best for every episode in each moment.” She added, “We just love the craft of acting and are trying to do the best we can to bring Pat’s story to life.”

The format of the sitcom itself is an almost sacred one, the two reveal to us, and in many ways “The Ms. Pat Show” feels like a baton passing, ushering in a new era of the genre. Mixing intense, often deep topics with raunchy humor and solid acting, it offers opportunities for the actors to flex their talents.

“The baton is being passed to us,” Calloway told us. “We grew up on ‘Good Times,’ Sanford & Son,’ ‘The Jeffersons,’ ‘Mork & Mindy’ … I can keep going! So it’s great to be a part of that tradition, and it’s great to be able to take the torch and the baton and just take it into the next generation of viewers and folks that watch sitcoms and what that means.” He added, “It’s an honor.”

Roman chimed in, telling us, “Especially for our culture, right? It’s been few and far between how many have really been successful. That’s what’s faded away. We don’t have ‘My Wife & Kids,’ anymore, we don’t have ‘Martin,’ … so for ‘The Ms. Pat Show’ to be stepping into that genre in the way that we’re doing it by being real and authentic and using genuine storylines and socially conscious topics and still making them humorous … it’s something we couldn’t have thought that this is how it would be.” 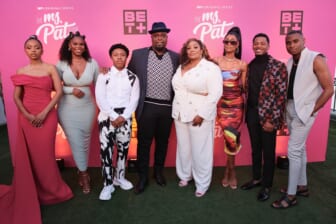 Also Read:
‘The Ms. Pat Show’ cast on Season 2, tackling deep subjects: ‘It’s an honor to be a part of it’

“We’re blessing folks and we are being blessed by them,” Calloway continued. “We find the funny out of the pain, versus trying to be funny. The stories are so great and out of that comes that funny. Out of that comes that story. And working with people like Tami Roman, oh my God! Oh my goodness.”

“The Ms. Pat Show” is currently streaming on BET+. Check out our full interview with Roman and Calloway now.