Michelin-starred chef admits using N-word, says he only repeated employee’s comment to him

The now-former employee has been protesting outside the restaurants.

Michelin-starred chef Eric Ziebold is under fire after a former food runner said he used the phrase “stupid n—–” at least four times during a conversation in May about racism in the workplace.

The former employee, Klyn Jones, a 25-year-old Black woman is protesting Kinship and Métier restaurants, which share a Washington D.C. building and are owned by Ziebold and his wife, The Washington Post reported.

Ziebold, 50, who is white, admits to using the phrase but insists he was only repeating it after Jones. He has since said he was committed to doing better.

“While addressing the concerns of a team member feeling safe in our restaurant, I was asked a question,” Ziebold said in a statement to The Post. “While stating I would find the proposed behavior unacceptable, I regretfully repeated their word in my response. I should have been more sensitive while trying to assure our team member that I was committed to an environment where they would feel safe.”

According to two people with knowledge of the conversation who spoke on the condition of anonymity, Jones wanted Ziebold to be aware of other racist events she had encountered in restaurants, including at Kinship. She was interested in how Ziebold would respond to an incident similar to one in which she had been called a “stupid n—–” at a restaurant in Chicago.

Regardless of Ziebold’s explanation, Jones said, she believes there is never a situation in which using a slur in the workplace would be acceptable or suitable, adding that it is harmful and shows a lack of respect. 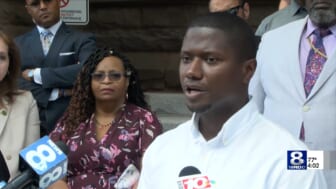 In a statement to The Post, Jones thanked people who “stopped to talk to me and chose to patronize another establishment as a result of my protest.”

“My goal,” she added, “was to inform patrons (most specifically Black patrons) of what happened so they could make informed decisions on whether they still wanted to support this business.”

Following a flood of unfavorable comments, Yelp has disabled Kinship’s page. The accusations against Ziebold also are affecting employees and customers, who have either canceled reservations or endured harsh remarks on the sidewalk as they enter the restaurants, The Post reported.

Jones disclosed to The Post that she’s still waiting for an apology from Ziebold and has filed a hostile-workplace complaint with the Equal Employment Opportunity Commission.