Berlin to start returning art it stole from Nigeria

The body overseeing Berlin’s public museums said Thursday that it will begin repatriating hundreds of Benin Bronzes this year.

BERLIN (AP) — The body overseeing Berlin’s public museums said Thursday that it will begin repatriating hundreds of Benin Bronzes this year, after finalizing an agreement with Nigeria on the return of the objects that were stolen from Africa during colonial times.

British expeditionary forces looted vast numbers of valuable artefacts in 1897 from the royal palace of the Kingdom of Benin, in what is now southwestern Nigeria, including numerous bas-reliefs and sculptures dating as far back as the 16th century.

Hundreds were later sold or given to collections around the world, with more than 500 ending up in Berlin’s Ethnological Museum.

Germany began negotiating the return of the bronzes with Nigeria last year and signed a preliminary agreement in July. Nigerian officials said at the time they hoped it would prompt other countries to follow suit.

The Prussian Cultural Heritage Foundation said that under an agreement finalized with Nigeria’s National Commission for Museums and Monuments, about a third of the artefacts will remain on loan in Berlin for 10 years.

In a statement, the head of the Nigerian commission, Abba Isa Tijani, called on other museums outside Germany to agree to similar restitution deals. 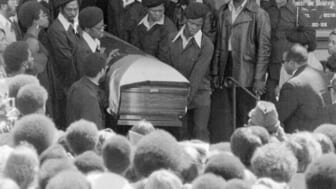 The Smithsonian Institution removed 10 Benin Bronze pieces from display at Washington’s National Museum of African Art and announced a new ethical return policy this year. Other U.S. museums have also begun discussions about returning such objects.

France declared last year that it would return the so-called Abomey Treasures to Benin as part of a wider effort to make amends for colonial wrongs.

Hundreds of objects from the Kingdom of Benin remain in the British Museum in London, which has resisted calls to return them.