Patrick Leahy, 29, faces a maximum 10-year prison sentence and up to $250,000 in fines after yelling racial slurs at a Black motorist.

TAMPA, Fla. (AP) — A Florida man has been convicted of a federal hate crime for a 2021 altercation with a Black motorist on a city street.

Court documents show a jury in Tampa convicted Jordan Patrick Leahy, 29, on Wednesday of interfering for racially-motivated reasons with the motorist’s right to use the street.

Leahy faces a maximum 10-year prison sentence and up to $250,000 in fines. A sentencing date has not yet been set.

Trial evidence showed that on Aug. 8, 2021, Leahy pulled alongside the Black motorist, identified only as J.T., who was driving along a Pinellas County road with his 4-year-old daughter and girlfriend. Leahy yelled racial slurs at J.T., pretended to “shoot” at J.T.’s vehicle with hand gestures and swerved into J.T.’s lane. 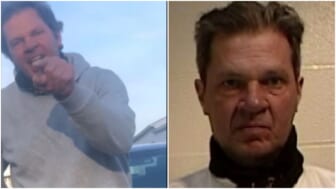 The pair confronted each other at a stoplight and when sheriff’s deputies arrived, prosecutors say Leahy made several racially-motivated comments such as saying Black people should stay “in their areas.”

“No one should be targeted, threatened, intimidated or assaulted because of their race,” U.S. Attorney Roger B. Handberg said in a news release. “The defendant in this case acted upon his bigoted beliefs and put an entire family and others’ safety at risk.”