The Duchess of Sussex is topping the Spotify charts with her new podcast.

Meghan Markle is on a roll. The Duchess of Sussex launched her highly anticipated podcast “Archetypes,” last week. This week, she sat down with the “Elusive Chanteuse” herself, Mariah Carey, breaking down the word “diva.”

On each episode of “Archetypes,” Markle and her guests break down different words that are commonly used against women in society.

By talking through personal journeys with guests and additional commentary from cultural commentators, historians and more, the podcast uncovers, “the origin of these stereotypes and have honest conversations with women who know all too well how these typecasts shape narratives,” according to the show’s official description.

Carey opens up with Marble about her journey and career over the years and, of course, being called a diva. Markle, a longtime fan of Carey’s, is also able to connect with her on multiple levels, be it living under the pressure of the public eye, their mixed-race identities and more.

When asked whether she takes being called a diva as a compliment or a criticism, Carey has an easy answer. “I think it’s both. For me I think it’s both, I do,” she replies. “I know the origin of the word, but then I know, as I was growing up, like I said my mom [would] talk about a friend or something, ‘Well so and so is very much the diva.’ I didn’t know if that was bad, good — that’s how she spoke. It’s very much the grandeur of it all is what I envisioned.” 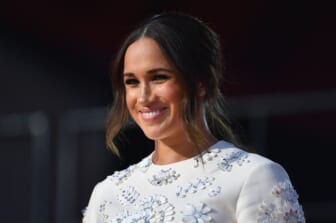 “To me it’s also so overused now,” Carey added, referring to the term, diva. “It’s become like, ‘she’s the cupcake diva!’ I think they use it as just like a throwaway adjective.”

Markle added that the “VH1 Divas Live” concerts in the ’90s, when she was growing up, helped shape the term for her in a positive light. The concerts brought together the biggest “divas” in music like Aretha Franklin, Whitney Houston and Carey. “That was the glamour, that was being over the top and the indulgence.”

Markle and Carey also connected around their mixed-race identities. “I didn’t fit in,” Carey disclosed while discussing her upbringing. “You know, it would be more of the Black area of town or then you could be where my mom chose to live — were the more — the white neighborhoods. And I didn’t fit in anywhere at all.”

Markle told Carey that the singer had an impact on her. “You were so formative for me. Representation matters so much!”

Later in the episode, Carey discusses other moments in her career, including her divorce from Tommy Mottola, working her way to financial and creative freedom and more.

“Archetypes” has been a huge success for both Markle and Spotify. The first episode, which featured Serena Williams, topped the Spotify charts, unseating popular podcaster Joe Rogan.

The first two episodes of “Archetypes” are currently streaming on Spotify.