The tennis legend's daughter was courtside, paying homage to Serena's hairstyle from when she won her first U.S. Open title in 1999.

NEW YORK (AP) — When Serena Williams won the 1999 U.S. Open for her first Grand Slam title at age 17, she wore white beads in her hair. On Monday night, when Williams won her first match of the 2022 U.S. Open at age 40, her daughter, Olympia, was courtside, sporting a hairstyle paying homage to Mom’s from all that time ago.

“It was either her wear beads or me, so …” Williams said after beating Danka Kovinic 6-3, 6-3, finishing that thought with a smile. “I wanted to do it, but I just didn’t have the time.”

Williams was pregnant with Olympia while playing in, and winning, the 2017 Australian Open for her 23rd Grand Slam title. Olympia was born later that year and turns 5 on Thursday.

“Yeah, she likes, actually, wearing them. She asks to wear beads a lot,” Williams said. “It actually wasn’t my idea, but I was so happy when she had them on. It’s perfect on her.”

On Monday, Olympia sat in Williams’ player guest box in Arthur Ashe Stadium, at one point snapping pictures with a camera. She was with her father — Williams’ husband, Reddit co-founder Alexis Ohanian — and her grandmother — Williams’ mom, Oracene Price. 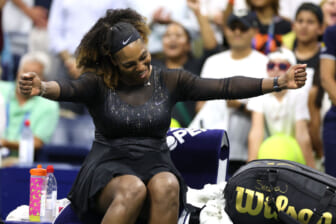 Also Read:
Serena Williams not done yet; wins 1st match at US Open

After the match, Williams’ long and influential career was celebrated during an on-court ceremony that included a video narrated by Oprah Winfrey and a speech from Billie Jean King. At the end, Ohanian carried Olympia down on to the court.

“Tonight was all a surprise, actually, towards the end. I didn’t know any of that was happening,” Williams said. “I was just ready to do the on-court interview and leave.”

She has said she is ready to move on from her playing days to focus on having another child and pursuing her business interests.