The Biden-Harris administration continues its work to close the racial equity gap in vaccine access by providing additional doses and other resources for upcoming LGBTQ+ events, including Atlanta Black Pride.

The Biden-Harris administration announced on Tuesday new actions for distributing vaccines for the monkeypox virus (MPV) outbreak, including a new pilot program targeting Black and brown LGBTQ+ communities who are most at risk.

The White House said its new program will provide the availability of additional vaccines and other “prevention resources” to communities of color, citing CDC data that continues to show Black and Latino gay, bisexual, and other men who have sex with men make up a disproportionate share of MPV cases.

The pilot program specifically targets Georgia, Louisiana and California ahead of major LGBTQ+ events, including Atlanta Black Pride, Southern Decadence in New Orleans, and Pridefest in Oakland—all of which take place in the coming weeks beginning Labor Day weekend.

“These events will reach a diverse segment of the LGBTQI+ community and help address some of the equity gaps that we are seeing in vaccination among people of color,” said Dr. Demetre Daskalakis, White House National Monkeypox Response Team deputy coordinator, during a Tuesday press briefing. 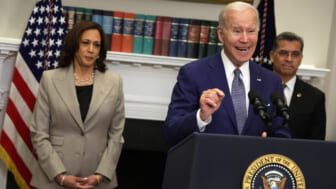 The White House will allocate up to 10,000 vials of MPV vaccines that health departments can request for “smaller-scale equity interventions” based on local data that shows disproportionate cases, particularly among Black and brown LGBTQ+ populations. The administration is also working with state and local officials to set up testing and vaccination clinics onsite at upcoming festivals and events.

Daskalakis noted that the administration is replenishing Georgia’s vaccine stock with up to 5,500 additional doses ahead of upcoming Black Pride events in Atlanta and has already held “routine vaccination clinics” over the last week in Dekalb, Cobb and Gwinnett counties. The Georgia Department of Health, county health departments and community partners, he said, will continue that work and support 12 additional vaccination events across the city.

“It’s a welcome step towards meeting communities where they are, which is a crucial element in centering equity…we cannot allow equity to remain an afterthought,” said Todd. 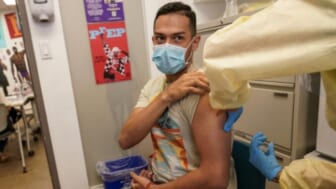 He noted that the racial inequities seen in the MPV outbreak in the United States demonstrate a need to “reform our public health system so that it works for everyone, including the Black and brown people who have been historically sidelined by bias, stigma and outright discrimination.”

Todd continued, “We cannot only focus on racial disparities in health care during an emergency like MPV—because as soon as the fire is put out, Black and brown communities continue to bear the burden of being ‘disproportionately affected.’”

He added, “They’re disproportionately affected because we’ve allowed it to happen. That needs to change.”

Since the onset of the 2022 outbreak, data analyzed by the Centers for Disease Control and Prevention (CDC) and the World Health Organization (WHO) have consistently found that cases of MPV are most prevalent among gay, bisexual men, and other men who have sex with men, also referred to as “MSM” in the medical community.

In recent months, the Biden-Harris administration has taken actions to help address the outbreak and ensure those most at risk have access to vaccines. In its latest announcement, the White House said it is “approaching being able to provide two doses of vaccine to the 1.6 million individuals across the country most at risk of contracting the virus.”

The Federal Food and Drug Administration (FDA) granted emergency use authorization for the JYNNEOS vaccine earlier this month. The EUA allows health care providers to use the vaccine by intradermal injection for adults 18 years and older who are determined to be at high risk for monkeypox infection.

In a previous interview with theGrio, Dr. Anthony Fauci, chief medical adviser to President Joe Biden, noted that most cases of MPV are contracted through sex and urged communities most at risk to be “prudent” about their sexual encounters.

“Once you get vaccinated and things are under control, then you can essentially go back to some sort of a normal way of looking at your life,” said Fauci. “But for the time being,” he warned, “really stay heads up for this because…though it isn’t a deadly infection, it can be really quite serious in some individuals with a lot of painful lesions that are very disruptive to one’s life.”