Author and "Rap Sh!t" writer Chad Sanders is set to host "Direct Deposit: What Happens When Black People Get Rich."

Audible is teaming up with alliedmulticultural to release a new podcast series, “Direct Deposit: What Happens When Black People Get Rich.”

The show features guests like actress-author Gabrielle Union and actress-writer-producer Issa Rae, who will speak with host Chad Sanders about their journey to economic mobility.

A trailer for the eight-part series will be available via Audible.

“Direct Deposit” will showcase candid conversations with prominent Black people about all the things that happen to African Americans when they become rich. On it, Sanders — author of the February 2021 book, “Black Magic: What Black Leaders Learned From Trauma and Triumph,” and writer of “Rap Sh!t,” the HBO Max comedy series Rae created — shares insights from elite Hollywood players like Rae, Union, broadcast journalist Soledad O’Brien, and film producer and MACRO founder Charles D. King.

On his show, Sanders will also share his story of rising from hardship to success. In the trailer, he speaks about quitting a stable job in the tech industry and risking his financial security to pursue a dream of working in Hollywood. Soon, he’d begin working with veteran director Spike Lee on his path to realizing his creative vision.

“Direct Deposit” will find Sanders going to “the clubs, black cars, studio lots, bedrooms and therapy sessions inhabited by Black super-earners” in order to examine the raw, uncut stories about being Black and wealthy. 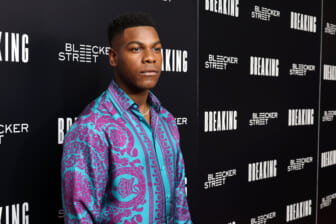 “We’re going to take you on the ride from being broke and hungry, to cashing some big checks,” Sanders says in the podcast’s trailer. “And all the complications that come with trying to get rich.”

“Direct Deposit: What Happens When Black People Get Rich” will premiere on Audible on Thursday, Oct. 13.