The legendary poet and writer is retiring as an English professor after 35 years at the university.

Nikki Giovanni is moving in a new direction after 35 years. The legendary poet is retiring as a professor in the English department of Virginia Tech, the university announced on Sept. 1.

Giovanni, a celebrated poet, essayist, and author, has been teaching at Virginia Tech since 1987. She was recruited to teach there by school faculty member Ginney Fowler, who pursued Giovanni after hearing her speak at a conference.

Living in Ohio at the time, Giovanni accepted the offer over the telephone, though she had never heard of the school. She, her son and mother moved to New River Valley and she started teaching as part of Virginia Tech’s Commonwealth Visiting Professor program.

As part of the National Black Arts Movement, Giovanni was enlisted to join the Commonwealth Visiting Professor program as a campaign to bring minority artists and scholars from minority groups to Virginia Tech.

In 1999, Giovanni was named University Distinguished Professor, an honor for Virginia Tech faculty members whose work had gained national and international recognition. She created a poetry competition in 2005, awarding a cash prize to students of all disciplines. It was first named after former Virginia Tech president, late Charles Steger. It is now called the Giovanni-Steger Poetry Competition. 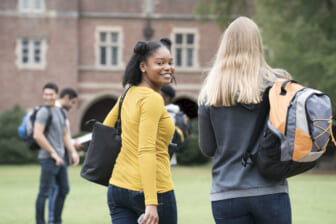 Also Read:
Some words of advice for incoming college freshmen

Former students spoke glowingly of Giovanni. Award-winning children’s book author Kwame Alexander had several anecdotes. From not initially understanding her process when he took her class to her generosity regarding a poetry submission and learning that she recommended him as a speaker at a conference of English teachers in New York. “This is what a real teacher does,” he said. “They give you what you need, they inform and inspire you, they put you on this path, and they do these little things to give you a leg up.”

The educator spoke fondly of her time at Virginia Tech. “I do enjoy talking to sharper minds, and Tech has good minds.”

Her goal, she said, was to teach her students to challenge what was around them. “I want my students to not accept what they are hearing, but to look and say ‘what kind of sense does this make?’ and ‘what is going to be the end result’?”