The lawsuit claims that the stand-up comics groomed and molested two people as minors for videotaped skits.

Tiffany Haddish and Aries Spears are being sued for alleged child abuse. The two accusers claim that the two comedians assaulted them as minors several years ago.

The plaintiffs, siblings who are choosing to identify as Jane and John Doe, filed a lawsuit against Haddish and Spears in Los Angeles Superior Court this week, according to USA Today. Jane, 22, and John, 15, are accusing the entertainers of alleged sexual battery, sexual harassment and sexual abuse of a minor. Jane filed the lawsuit on behalf of herself and John.

Haddish lawyer Andrew Brettler denied the claims, saying “Plaintiff’s mother … has been trying to assert these bogus claims against Ms. Haddish for several years,” he said. “Every attorney who has initially taken on her case — and there were several — ultimately dropped the matter once it became clear that the claims were meritless and Ms. Haddish would not be shaken down.” 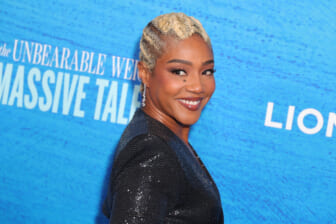 The sketch was on the channel until four years ago when “Funny or Die” took it down. The company issued a statement about the video:

“‘Funny Or Die’ found this video absolutely disgusting and would never produce such content. We were not involved with the conceptualization, development, funding, or production of this video. It was uploaded to the site as user-generated content and was removed in 2018 immediately after becoming aware of its existence.”

“The plaintiffs are both traumatized for life” the suit read. “Similar to the manner in which Giselle (sic) Maxwell groomed young girls for Jeffrey Epstein, upon information and belief, Haddish made Plaintiff Jane Doe feel comfortable and special, but this was all a grooming tactic by Haddish to entice and coerce both children into filming sexually explicit child pornography skits.”