African nations urged to pile on pressure at climate summit

Monday, European nations pledged a further $25 billion to Africa to help its countries adapt to the effects of climate change.

MOMBASA, Kenya (AP) — The former Irish President has called on African nations to pile on the pressure on rich, heavily-polluting countries to fulfill their climate pledges to the continent during a visit to Uganda.

Mary Robinson, who is also chair of the Elders group of global leaders who advocate for peace and justice, told The Associated Press on Monday that the Group of 20 “must come up with new plans” to support Africa with its climate change efforts at the upcoming United Nations climate conference in November, known as COP27.

On Monday, European nations pledged a further $25 billion to the continent to help countries adapt to the effects of climate change. The continent has suffered in an ongoing devastating drought in the east, with flooding and cyclones severely damaging southern countries.

Robinson said that the Elders “feel very strongly that we need COP27 to succeed” and encouraged African leaders “to create political pressure” so that developed countries can fulfill their promises.

Rich countries have so far failed to keep a $100-billion-a-year pledge to poorer nations to help them adapt to the effects of climate change and transition to greener energy sources. Developed nations are larger emitters than poorer ones, with the African continent contributing just 3% to 4% of global emissions despite being 17% of the global population.

“We do not want to have a situation where promises that are not fulfilled undermine further the existing trust,” Robinson said. She added that developed countries should “give more to get clean energy, technology and investments towards African countries.” 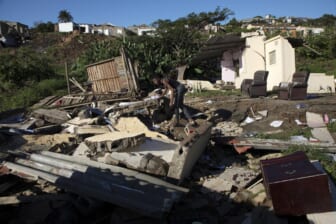 Robinson is in Uganda for her second visit to the continent this year and is promoting renewable energy initiatives in schools alongside youth climate activist Vanessa Nakate.

Robinson noted that COP27, which will be held in the Egyptian seaside resort of Sharm el-Sheikh, will be regarded as an “African COP.”

She added: “It will be more an African COP if there are more voices from Africa and the developing world making this as inclusive as possible” and highlighted the importance of younger and more diverse voices.