The psychologist is the founder of a nonprofit that focuses on the mental health needs of young people of color.

The AAKOMA Project is a mental health nonprofit focused on the needs of young people of color.

AAKOMA’s State of Mental Health for Youth of Color 2022 survey revealed that Black youth are significantly more likely to make a suicide attempt compared with Latino/e, Asian and Native American youth. Females are more likely to report suicidal ideation, according to the survey of nearly 3,000 people of color ages 13 to 25. 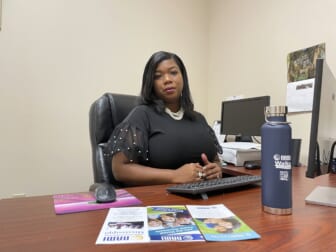 During the interview, Dr. Alfiee shared culturally relevant signs to pay attention to when someone might be considering suicide, such as: being involved in violence, having unrestricted access to firearms, a change in eating and sleeping behaviors, social isolation, erratic behaviors and uncharacteristic behaviors.

Feelings of guilt and somatic symptoms are additional warning signs.

“When we think about somatic symptoms, what we’re talking about is feelings of physical pain,” explains Dr. Alfiee.  “So in many communities of color, people will describe pain, physical pain that you can’t find any medical explanation for.”

Dr. Afiee continues, “In addition, the traditional literature talks about feelings of guilt that may plague a young person or anyone who’s contemplating dying by suicide. The culturally relevant aspect of this is that guilt is not necessarily the way that it’s going to be expressed in many communities of color and in particular in the Black community. What you may hear instead of guilt is a person feeling like their family might be better off without them or that they may be a drain on their family.”

A myth that the psychiatrist debunked is that there are no interventions designed to help reduce suicide. In fact, there are different approaches.

The AAKOMA Project has “AAKOMA Flow,” which is designed to help increase and improve communication between parents, caregivers and young people, in part to help reduce suicide by helping people identify signs and symptoms and helping them find a way to communicate when they see those signs and symptoms present in their young person.

To learn more about The AAKOMA Project, click here.