OPINION: The recently signed Inflation Reduction Act, the largest climate action investment in American history, does not do enough to protect our most vulnerable communities. 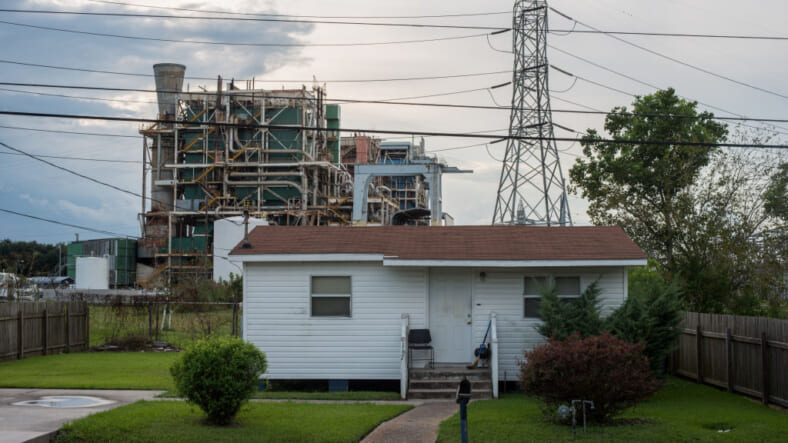 A house sits along the long stretch of River Road by the Mississippi River and the many chemical plants October 12, 2013. "Cancer Alley" is one of the most polluted areas of the United States and lies along the once pristine Mississippi River that stretches some 80 miles from New Orleans to Baton Rouge, where a dense concentration of oil refineries, petrochemical plants, and other chemical industries reside alongside suburban homes. (Photo by Giles Clarke/Getty Images.)

Following the 17th anniversary of Hurricane Katrina, the U.S. is about to address the costliest climate destruction it heralded by throwing its victims—primarily Black Americans; what else is new?—under the bus.

The ongoing material and psychological damage Katrina brought to New Orleans in 2005 was the first red flag that the climate crisis was, and would continue to be, a huge source of suffering and loss in the United States if we did not act to slow climate change’s progression. That’s proven to be true, and it has disproportionately affected Black communities thanks to centuries of systemic discrimination. It’s impossible to separate climate justice and racial justice. 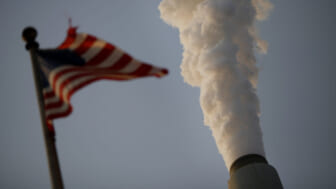 Now the government is finally taking decisive climate action, aiming to cut U.S. carbon emissions with the Inflation Reduction Act. The bill, which President Biden signed into law last month, is projected to lower U.S. greenhouse gas emissions to 40 percent of 2005 levels by 2030. It contains $369 billion in energy and climate investments and incentives, including for electric vehicles, solar and wind energy, and support for disadvantaged and vulnerable communities.

But the bill also ties the construction of new solar and wind infrastructure to fossil fuel extraction. According to the Center for Biological Diversity, because of a side deal struck with Sen. Joe Manchin (D-W.V.), the IRA requires the Department of the Interior to offer at least 62 million acres of public lands for oil and gas leasing, which will maintain current levels of fossil fuel production for at least another decade beyond the nine years scientists say remain to avoid a warming tipping point.

These lease lands are centered around the Gulf Coast and in Arctic Alaska, another site of early warning about rising temperatures. And they overlap with “cancer alley,” the region from New Orleans to Baton Rouge where cancer rates can be up to 50 times the national average. Many residents in these primarily Black areas also endured the destruction of Hurricane Ida, whose first anniversary, another grim milestone, will be next month. The Black, Hispanic and Indigenous communities central to our awakening to the dangers of climate change continue the long American tradition of being considered expendable.

Additionally, about a quarter of U.S. greenhouse emissions stems from fossil fuel production on public lands, so tying land leasing to clean energy development will fail to prevent temperatures from reaching the threshold that scientists say will cause irreversible damage to the planet.

This climate-induced damage disproportionately affects poor Americans and people of color, including those living around the Gulf Coast. As temperatures continue to warm, these communities will continue to be on the frontlines of a disaster we could have prevented. The recent deadly floods that devastated poverty-stricken mining communities in Kentucky are just the latest example, leaving residents wondering how much their historic livelihood contributed to their current suffering.

These are trade-offs we should not be willing to make. The largest climate action investment in American history does not do enough to protect our most vulnerable communities. Because of that, the bill’s passage is not a moment to proclaim victory but a moment to keep fighting on behalf of Gulf Coast communities.

Hip Hop Caucus, the culture-centered racial justice organization I’ve led since 2004, intends to do just that. Every year, we spend the August 29 anniversary of Hurricane Katrina with our friends and neighbors in New Orleans, in my home state of Louisiana, in community with survivors. In Katrina’s aftermath, we organized a justice and accountability response and offered hands-on help. After the immediate crisis passed, we asked our community what kind of support they needed going forward. Their response: remembrance and continued advocacy to prevent future harm. So we return annually, whether it’s a marquee anniversary year or not, to commemorate with our brothers and sisters and to demand that our state and national officials do better.

We continue to show up in the spirit of solidarity—not charity. We will never desert people who need us. Our government shouldn’t, either.

Now that President Joe Biden has signed the Inflation Reduction Act into law, here’s what he should do next: declare a climate emergency under the National Emergencies Act of 1976, which would give him the power to stop fossil fuel drilling by executive order and to ramp up the manufacturing of electric vehicles. 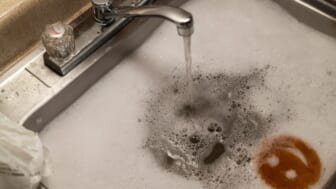 He should use these powers to halt drilling in the Gulf and pipeline expansions throughout the continent and to push for a completely electrified fleet of federal vehicles. The U.S. recently released plans to replace its aging fleet of Postal Service vehicles, and only 20 percent of them are slated to be electric, a tragic missed opportunity that Hip Hop Caucus protested outside of federal headquarters.

It’s been 17 years since climate change became something the U.S. could no longer ignore, and our options for slowing it diminish by the minute. Now is not the time to leave our long-suffering children, brothers and sisters behind.

Rev. Lennox Yearwood Jr. is the President & CEO of Hip Hop Caucus, a member of the Zero Emissions Coalition and host of the award-winning podcast, The Coolest Show.