‘The Amber Ruffin Show’ returns to Peacock this month

The late night host promises a "bigger and better than ever" show in the promotional clip for the new season.

Get ready for more Amber Ruffin! The late night series on Peacock, “The Amber Ruffin Show,” will officially return later this month, continuing its mix of political and cultural commentary, sketches, celebrity guests and more.

The series will officially return this fall with five episodes, the first of which airs on Sept. 30, followed by episodes on Oct. 7, Nov. 4, Nov. 11 and Dec. 16. Ruffin promises in a season teaser that the episodes will be “bigger and better than ever.”

In a statement that Deadline obtained, the late night host and writer said, “We are so excited to bring you more of ‘The Amber Ruffin Show!’ This time we have more stars and more margaritas! It’s gonna be a party!”

Head writer and executive producer Jenny Hagel also said in the statement that they, “can’t wait for fans of “The Amber Ruffin Show” to see what we have in store for them this fall. We’ve got more silly sketches, more smart commentary, more surprise celebrity guests, and more jokes that will make you laugh until tequila comes out of your nose.”

Ruffin continues to carve out her place in late night history, a journey that started with her barrier-breaking work on the “Late Night with Seth Myers.” Hired in 2014, Ruffin became the first Black woman to ever write for a late night talk show. Now with her own show, Ruffin continues to produce must-see comedy segments, celebrity guest interviews and more on the series.

Ahead of the Sept. 30 premiere, the first two seasons of “The Amber Ruffin Show” are currently streaming on Peacock. 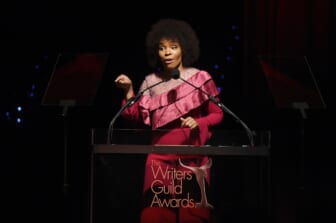