Abrams tells theGrio that her race to become the first Black female governor in U.S. history is "absolutely winnable."

Stacey Abrams is undeterred by her 2018 defeat in the Georgia gubernatorial election. The Democratic nominee in this year’s contest for governor said she’s “in this to win” during a recent interview with theGrio.

“While I did not win in 2018, we had the single-highest voter turnout for any Democrat in the history of the state of Georgia, and we were able to build on that in 2020 for Joe Biden, and in 2021, for [Senators] Raphael Warnock and Jon Ossoff,” Abrams explained. “For years, we’ve become convinced that we didn’t have the ability to change outcomes. Now we know we do. And part of what I’m trying to leverage is reminding people of their power to shape the future.”

The high turnout among Black voters in Georgia was largely credited for the major Democratic Party wins in 2020 and 2021, and Abrams — whose voter advocacy group Fair Fight, among others, helped to register new Black voters who had not traditionally voted — is hoping to replicate that on Nov. 8. While Black voters are expected to overwhelmingly vote for Abrams over Kemp, how many actually show up to the polls could make or break the race for governor. Not to mention, midterm elections, like this year’s contests on Election Day, historically turn out fewer voters than presidential election cycles. 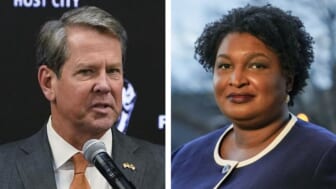 One strategy of the Abrams campaign is outreach to Black male voters, who could make the difference in her slightly lagging support among Black voters, according to polling. More nationally, political strategists have been exploring Black men as a disaffected constituency for the Democratic Party. Some have noted the small yet noticeable support among Black male voters for Trump in the 2016 and 2020 elections.

“Black men, in particular, have been left out of conversations,” said Abrams. The former minority leader of Georgia’s House of Representatives said she understands “the power of Black men to participate in our elections” but added, “I also understand that their grievance is with politics writ large.”

She explained, “This is often not a conversation of whether they’re going to choose me or my opponent. It’s whether they feel that they should participate at all. And my responsibility is to articulate a plan that says, this is how we win.”

Abrams named some of the concerns shared by Black men, including the “overdisciplining of our young Black boys in our public school system” and a lack of jobs once they finish high school. The 48-year-old politician believes her economic agenda is what will not only attract Black male voters and Black voters at large but overall improve the lives of Black Georgians.

Abrams said she wants to create 20,000 apprenticeships for young Georgians, make technical college free and have need-based financial aid. “Black students are the least likely to get access to the merit-based aid that we have, and they’re the most likely to lose it,” she noted. “But if we expand access to need-based aid, our students cannot only go to college, [but] they can finish college.”

The Democratic nominee said she wants to establish a small business investment fund so that more Black-owned businesses “can get access to capital” and “make certain that we are buying from Black businesses.” She added, “Black people are 33% of Georgia’s population and yet we are less than 2% of our business revenue.” 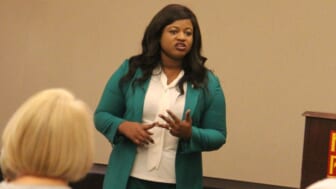 Abrams also called out her opponent, Gov. Kemp, who she said won’t spend the state’s $5 billion surplus on Georgians who need it most but instead “give[s] to the wealthiest Georgians, just as he has every single time he gives tax breaks to the rich and pennies to the rest of us.” She added, “I want to invest in all of us. And that’s what’s at stake in this next election.”

Another concern as it relates to Black voter turnout is Georgia’s current voting laws. In 2021, just a couple of months after Republicans, led by former President Donald Trump, pushed the false narrative of widespread voter fraud in the 2020 elections, Gov. Kemp signed a voter law that significantly restricted early and absentee voting — two modes of voting used by Black voters. The law also makes it illegal to pass out food and water to voters waiting in polling lines — lines that are commonplace in Black communities.

“They’re going to absolutely present obstacles, but what we’re working to do is help people navigate those obstacles,” said Abrams, who said that 1.9 million voters will have limited access to drop boxes, which she said is “necessary because we have so many people working on-call schedules who can’t get to the drop boxes between 9 a.m. and 5 p.m.”

She also noted that Black seniors, who, for the last 15 years, would receive their absentee ballots in the mail, will now have to reapply if they did not vote in the primary election due to Georgia’s new voting rules. “Imagine being 90 years old, having voted the same way for 15 years and you’ve now been told or not told this year, ballots are not going to show up, and now the window for getting access is even more limited.”

Abrams said her campaign’s goal is to “overwhelm the system” with the presence of Black voters by encouraging them to vote early in person. “The earlier we vote, the harder it is for them to block us. The later we wait, the more dangerous the obstacles become,” she said.

Ultimately, Abrams said, who is elected governor has just as many consequences, if not more, than national elections. She pointed out that controversial laws and policies like Stand Your Ground, mass incarceration in Black communities and the cutting of social safety net programs were all first enacted by governors.

“Jim Crow never had a single federal law,” she noted. “It was nine Southern governors who stripped Black people of their humanity for 150 years.”

Abrams continued, “In less than 60 days, we have an opportunity to tell a brand new story not only about Georgia but about the South by electing me as the next governor.”