Scientists seek to identify more Black people from recently reburied remains of victims of the 1921 massacre and plan to search for additional bodies.

Remains found and exhumed from Oaklawn Cemetery last year and temporarily reburied there will be exhumed again for additional DNA samples in an effort to identify them, according to a report issued Tuesday to the 1921 Graves Investigation Public Oversight Committee.

The remains will then reburied in the same location, according to the report by state archaeologist Kary Stackelbeck and forensic anthropologist Phoebe Stubblefield.

Additional graves in the cemetery also will be excavated and those in simple, wooden coffins — said to be the type massacre victims were buried in — will be exhumed, the report said.

“We are already making preparations,” Stubblefield said. “We don’t have a date, but we hope to be there this fall.”

The 1921 massacre occurred when a white mob descended on Greenwood, a predominantly Black neighborhood in Tulsa, the violence erupting after a 19-year-old Black male was arrested for allegedly assaulting a 17-year-old white female in an office building.

A search for the graves of massacre victims began in 2020 and resumed last year with nearly three dozen coffins recovered that contained the remains of possible victims. 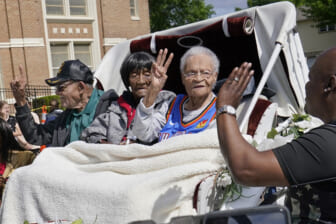 Fourteen sets of the remains were sent to Intermountain Forensics in Salt Lake City, Utah, in an attempt to identify them with two sets having enough DNA recovered to begin sequencing.

Scientists plan to conduct soil testing at two sites along the Arkansas River where victims of the massacre were believed to have been buried in mass graves.

The collection of additional DNA is an effort to provide enough to begin sequencing on the other remains.

None of the remains recovered thus far are confirmed as victims of the massacre in which more than 1,000 homes were burned, hundreds were looted and the thriving business district known as Black Wall Street was destroyed.

Historians who have studied the event estimate the death toll to be between 75 and 300.

Victims were never compensated, however a pending lawsuit seeks reparations for the three remaining known survivors of the violence.