Mickey H. Osterreicher, the general counsel for the photographers association, called the law “an unconstitutional solution in search of a non-existent problem.”

PHOENIX (AP) — The Republican leaders of the Arizona Legislature will not try to defend a new law limiting up-close filming of police that has been blocked by a federal judge, a decision that essentially ends the fight over the contentious proposal.

Senate President Karen Fann and House Speaker Rusty Bowers both said they would not intervene in the case by the Friday deadline set by the federal judge when he temporarily blocked the new law from taking effect last week on First Amendment grounds.

And the bill’s sponsor, Republican Rep. John Kavanagh, said Friday that he has been unable to find an outside group to defend the law, which was challenged by news media organizations and the American Civil Liberties Union.

The groups will now ask that the law, which was set to take effect next week, be permanently blocked.

Kavanagh said he will review U.S. District Judge John J. Tuchi’s ruling and see if he can craft a law that passes constitutional muster. He said the law is needed to keep people from distracting police while they are trying to make an arrest, but Tuchi agreed with the challengers that it runs afoul of precedents that say the public and press have a right to film police doing their jobs.

Tuchi noted that there are already Arizona laws barring interfering with police, and that singling out people for taking videos appears to be unconstitutional on its face. And he wrote in his ruling that barring someone from using a phone or news video camera to record — without banning other actions — is a content-based restriction that is illegal. 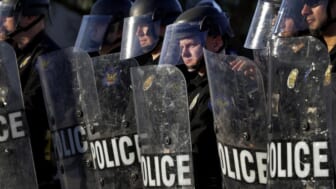 Also Read:
Arizona law makes it illegal to record police actions unless you’re more than 8 feet away from officers 

“If the goal of HB2319 is to prevent interference with law enforcement activities, the Court fails to see how the presence of a person recording a video near an officer interferes with the officer’s activities,” Tuchi wrote.

The law makes it illegal to knowingly film police officers 8 feet (2.5 meters) or closer if the officer tells the person to stop. And on private property, an officer who decides someone is interfering or the area is unsafe can order the person to stop filming even if the recording is being made with the owner’s permission.

Bystander cellphone videos are largely credited with revealing police misconduct — such as with the 2020 killing of George Floyd at the hands of Minneapolis officers — and reshaping the conversation around police transparency. But Republican Arizona lawmakers say the legislation was needed to limit people with cameras who deliberately impede officers. 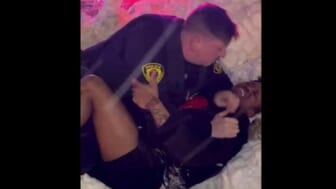 Kavanagh and the Legislature were warned repeatedly by the ACLU and the National Press Photographers Association that the proposal would violate the First Amendment, but it passed anyway with only Republican support. The NPPA, on behalf of itself and more than two dozen press groups and media companies including The Associated Press, also wrote to Republican Gov. Doug Ducey after the measure was passed, telling him as well that it was unconstitutional and urging a veto. Ducey signed the bill anyway.

Mickey H. Osterreicher, the general counsel for the photographers association, called the law “an unconstitutional solution in search of a non-existent problem.”

“It’s always a lot easier to write a letter than it is to have to file a lawsuit,” he said. “But some people like to do it the easy way and other people are forced to do it the hard way.”

Once a coalition of media groups and the ACLU sued, Republican Attorney General Mark Brnovich refused to defend the law, as did the prosecutor and sheriff’s office in Maricopa County, home to Phoenix.

Bowers said he and fellow Republicans disregarded opponents who said the bill was unconstitutional and essentially said “let’s just try and see what happens.”

“But when you get right down to where you to have to start spending money, no,” Bowers said. “We’ll just wait till next year.”