The Democratic Senate nominee also talks to theGrio about his viral campaign ad invoking a noose and calls out Paul for "weaponizing hate and hiding his hand."

Kentucky Democratic nominee for U.S. Senate Charles Booker has already made history. After winning his primary election in June, Booker became the first Black person to be a major party nominee for Senate in the Bluegrass State. Now, Booker is hoping to unseat Republican Sen. Rand Paul in the November midterm election.

“We’re on a path to not only beat Rand Paul, but win our future,” Booker told theGrio during a recent interview.

The 37-year-old lifelong Kentuckian, who comes from a “long line of ministers,” was Kentucky’s youngest Black state lawmaker when he was elected in 2018. Booker, who ran unsuccessfully for the Democratic Senate nomination in 2020, sees his campaign as an opportunity to make Black history yet again as Kentucky’s first elected Black U.S. senator. He also seeks to rise above partisan politics to address issues he believes all Kentuckians can support like halting hate, ending poverty, investing in solid infrastructure, and making health care more affordable. 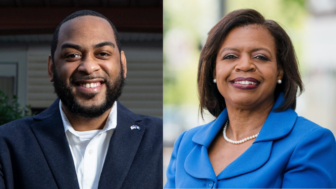 Booker, who said he is “proud” of the history he’s already made in this race, injects an aspirational and unifying tone familiar to Barack Obama, which earned the former president the kind of broad coalition support Booker will need to win a statewide election in Kentucky. The red state hasn’t elected a Democrat to the U.S. Senate in nearly 25 years and has voted for every Republican presidential candidate since 2000.

“My hope is that we can inspire people all over Kentucky, and across the country, to know that their voices matter … democracy is still worth fighting for, and that we can defy the odds at a time when division is so high [and] hatred and racism is so high,” he said. “It would mean a lot to send this type of message for the country.”

Growing up in one of the poorest zip codes in one of the most impoverished states in America, Booker said a major focus of his campaign is addressing poverty, which affects hundreds of thousands of Kentuckians, white and Black.

“Poverty is generational in Kentucky,” declared the Senate nominee, who introduced his “Kentucky New Deal” agenda to address economic challenges in his state.

“The reason why this campaign is so powerful is because we’re speaking to the issues from a real place,” he explained. “I’m a Type 1 diabetic. I’ve had to ration my insulin because we couldn’t afford it. And diabetes is not a partisan thing. The challenges of putting food on the table are not actually partisan. And by telling that story, we’re motivating and mobilizing people that voted for Trump, Bernie Sanders [and those who] never voted before.”

While Booker is unifying in his message, he is also not shy to call out his Republican opponent. The Democrat said Paul, the son of a former U.S. congressman and physician, “doesn’t understand” the economic hardships that he and other Kentuckians have endured.

“He is someone who is essentially a privileged, spoiled brat,” said Booker. “He doesn’t think he belongs or is responsible to anyone. He doesn’t see the struggles that we face because he hasn’t lived them. And quite honestly, he has sold us out.”

Earlier this year, Booker went viral for a campaign ad invoking the imagery of a noose in which he called Paul out for once comparing expanded health care to slavery, saying he opposed aspects of the Civil Rights Act and voted against a version of the Emmett Till Antilynching Act in 2020 at the height of the George Floyd uprisings in protest of racial injustice and police brutality. Paul later co-sponsored a revised version of the anti-lynching bill in 2022 that was signed into law by President Joe Biden.

“Rand Paul has built a career out of weaponizing hate and hiding his hand,” said Booker, who noted that the Republican lawmaker also voted alongside GOP senators to block a domestic terrorism bill after the mass shooting of nine African Americans inside a grocery store in Buffalo, New York, earlier this year. “He doesn’t think racism is a problem, and we can’t fix what we don’t face.”

As the United States grapples with political divisions, Booker said the country is currently “fighting for healing just as much as we’re fighting to beat back fascism and secure our pursuit of democracy.” He declared that his campaign is building a movement he calls a “new” Southern strategy.

“This campaign is a testament to regular people — from the ‘hood, to the holler, I always say — folks from the forgotten places, people that have felt like democracy didn’t account for them, that justice didn’t see them, [or] folks who were sort of accepting the struggles, not realizing that we can move them, that we can change them,” said Booker.

A lot is riding on this November’s elections for Democrats, who are seeking to hold onto their slim majority in Congress, particularly in the Senate. President Biden and Vice President Kamala Harris in recent months have been giving speeches across the country urging voters to elect more Democrats in the Senate in order to eliminate the Senate filibuster and pass Democratic agenda items like voting rights reform and federal abortion rights. 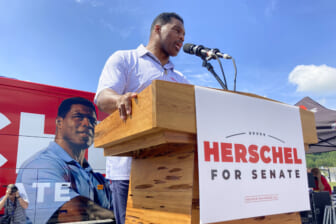 Democrats hope that Senate nominees like Booker will be successful on Nov. 8, which would give them the numbers they need to bypass some of the roadblocks created by conservative Democratic senators like Joe Manchin of West Virginia and Kyrsten Sinema of Arizona.

While he supports the Democratic Party’s mainstream agenda like abolishing the filibuster and “unpacking the Supreme Court,” Booker is also leaning in on the nonpartisan items of his Kentucky New Deal to invest in the state’s infrastructure, create “sustainable” jobs, “putting more money in the pockets of regular people, protecting social security, [and] making sure everyone has quality health care.”