The women of ‘Team Dream’ will inspire you to no end

TheGrio sat down with the director and stars of the short film about two brilliant, Black swimmers who are pursuing their passion of competitive swimming.

“Team Dream” premiered at the Martha’s Vineyard Film Festival to a standing ovation and now the inspirational short film from director Luchina Fisher is heading to the Chicago International Film Festival next month.

The 18-minute documentary, which was produced in partnership with Queen Collective and Widen the Screen follows two tenacious women — Ann Smith and Madeline Rabb — who are pursuing their passion as competitive swimmers while preparing for the National Senior Games.

These beautifully bold, Black women are living proof that there’s no expiration date on our dreams and they’ve got the medals to prove it. TheGrio caught up with the ladies to find out what prompted their fierce commitment to themselves, their dreams and their community at this stage in their lives.

“We’ve got a hell of a lot behind us and less in front of us and there is this sense of urgency that mature women feel,” says Rabb, 77. “It’s almost like you’re at a starting block. You’re making up for lost time and it’s full speed ahead in everything. But it’s also joyful and free. And we are free. We have the luxury of freedom and the luxury to explore and do whatever the hell we want to do.”

Rabb credits her time in the water with helping her get through a particularly challenging time in her life.  “I was a widow sick when I was 60 and I started swimming shortly after that. Swimming is a delightful form of activity and you get this Zen feeling and you get this level of freedom and it’s a wonderful way to clear your head,” she says. “I think swimming helped me during my grieving and then I got addicted and then I got so competitive.”

At 83, Smith is living out a dream she had when she was much younger during a time when women and Black folks were largely shut out of sports, especially swimming.

“I wanted to do this when we were in college, but couldn’t because there were no intercollegiate athletics for women. And so when I retired, I decided I was going to become an athlete,” Smith explains. “I’ve had a long career, and I thought, there’s still time and this is the time that I could do something that I would really enjoy.”

Smith spent most of her life focusing on social justice and it turns out that swimming is another form of activism in its own right. 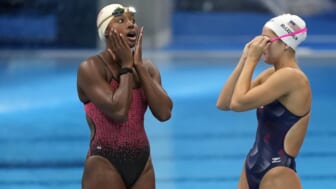 “I had worked on issues of social justice, education, inclusion of women and Blacks — particularly in higher education — my whole life. Getting Black people to learn to swim is also a social justice issue because the myth is that Black people don’t swim. But it’s really because we haven’t had facilities available to us,” she explains. “As a result, more little Black kids die drowning each summer because they don’t know how to swim. If this film in any way inspires others to go and learn to swim, then I’m honored. Swimming is the only sport that can save your life.”

Fisher, the film’s award-winning director, managed to capture the essence of these two women’s story and convey a message that’s about so much more than swimming.

“I think that in 18 minutes, the film takes you on this ride that really leaves you feeling like you’re desiring for yourself to do more. It challenges you in a way to ask ‘What’s my dream?’ What is it that I’m not doing that I always wanted to do? And maybe I can still do that,” says Fisher.

“I feel like Ann and Madeline really embody the notion of how you’re never really too old to dream and that’s my story, too, as a filmmaker. I don’t think this film is really just about sports. It’s really about dreams and holding on to those dreams and not letting anything stand in the way of them.”