BOSTON (AP) — The reigning Eastern Conference champion Boston Celtics suspended coach Ime Udoka after a months-long investigation by an outside law firm that found multiple violations of team policies but did not point to a larger cultural problem of sexual misconduct, owner Wyc Grousbeck said Friday.

“We go to great lengths … to run the organization with the central core value of respect and freedom in the workplace from harassment or any unwelcome attention,” Grousbeck said at a news conference. “This feels very much, to me, like one of a kind. That’s my personal belief. But I’ll have to verify that.”

Neither Grousbeck nor president of basketball operations Brad Stevens would elaborate on the specifics of the violations or the private report that was delivered to the team two days ago. But a person with knowledge of the matter, speaking on the condition of anonymity because the details were not made public, told The Associated Press that it involved an inappropriate relationship with a woman in the organization.

Udoka’s multiple violations involved one woman, a Celtics spokesman said Friday. No one else in the organization is facing discipline, Grousbeck said, adding that the team will be vigilant to make sure that Udoka’s actions aren’t a signal that there is a larger problem. 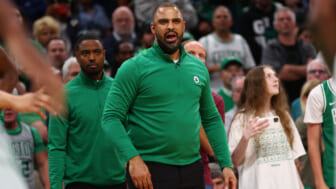 “I personally don’t believe that they’re a deeper signal,” Grousbeck said. “But we will be — I will be, personally — talking to members of the organization to make sure that that’s the case.”

A first-year coach who is three months removed from a trip to the NBA Finals, Udoka was suspended less than a week before training camp was to open for a team considered among the favorites to win it all this season. Assistant Joe Mazzulla was elevated to interim coach through June 30, 2023; the Celtics say they have not decided about Udoka’s future beyond then.

Stevens grew emotional when discussing the effect the scandal has had on the team — especially the women who were singled out on social media as possibly being involved. The team reached out to employees to offer support.

“We have a lot of talented women in our organization. I thought yesterday was really hard on them,” Stevens said. “Nobody can control Twitter speculation, rampant (expletive), but I do think that we as an organization have a responsibility to make sure we’re there to support them now. Because a lot of people were dragged unfairly into that.”

Grousbeck said the team learned of the problem earlier this summer and immediately brought in an outside law firm to investigate. After receiving the report, Grousbeck met with Udoka and he expressed “acceptance and appreciation for how this has been handled.”

Grousbeck would not say whether the suspension was unpaid but confirmed that it comes with a “significant financial penalty.” A year-long suspension is uncommon but not unprecedented for a professional sports coach, but the lack of public detail about Udoka’s behavior has led some — including Celtics Hall of Famer Paul Pierce — to question whether it was too severe. 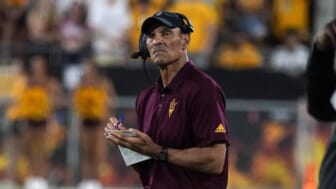 Grousbeck disagreed, and noted that Udoka accepted the punishment and apologized.

“I personally feel that this is well-warranted and appropriate, backed by substantial research and evidence and facts,” the owner said. “It was clear that something substantial needed to be done. And it was.”

Mazzulla, 34, led West Virginia to a victory in the 2007 NIT tournament and an upset over ninth-ranked Duke in the next year’s NCAA’s. His only head coaching experience was a two-year stint from 2017-19 at Division II Fairmont State in West Virginia.

“Joe’s going to be in charge. It’s not easy timing for him or the rest of the staff, but he’s an exceptionally sharp and talented person,” said Stevens, who added that he gave no serious thought to stepping back onto the bench himself.

“This will be an unbelievable challenge, but I’m really confident in the team and the coaching staff that’s going to take the court on Tuesday. It’s not what we expected to happen, but I’m very confident in them.”